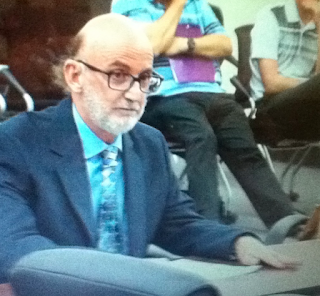 The committee suggested that the administrative and child services center of the building be named after Cuther and the learning grove, described as a "large learning exploration area" after Stephens.

After the committee's first meeting, it had narrowed its list of potential names to three, Cuther, Stephens and Sen. Ron Richard, R-Joplin and the Joplin City Council voted to support naming the center after Richard, but Richard asked that his name be withdrawn from consideration.

Earlier in the meeting, the board was told construction of the center is on target to be completed in July 2018.

The biographies provided by Belk are printed below"


Stephens began her career with Joplin in August 1989, teaching kindergarten at Irving Elementary School. Shortly thereafter, she joined a team that pursued the vision of establishing an early childhood center and became one of the first teachers hired for the early childhood special needs program. She ultimately became the director of that program, a position she held until her death.

"Stephens was a tireless, dedicated servant to her program, spending countless hours going way beyond the typical 9-to-5 scenario," Belk said in his prepared remarks. "Her director’s role was not only her career but was her life’s goal, enhancing the quality of life for the little ones, preparing them for school. She believed that education was for all children, no matter of their social, cultural or economic background."

For a time, Stephens also served as principal of Washington Education Center, and in 1999, she ran the summer school career program. She established the Great Expectations program, and her school was named as a model for the state of Missouri. Throughout her tenure, she oversaw the Parents as Teachers program.

In addition, Stephens was involved with the Joplin High School band program, serving as an executive board member for the Booster Club. She also volunteered with the north and south Head Start centers in Joplin, and she helped develop the St. Paul's United Methodist Church preschool program.

Melissa Fuell Cuther was an outstanding, highly respected leader in Southwest Missouri as a teacher, parks founder, board member, singer and author. Her accomplishments were numerous and varied, each adapted toward empowering people and improving society. Much of her humanitarian efforts occurred in an era when blacks were barred from bathrooms, restaurants and public schools, yet she remained determined.

Cuther was born in 1886 in Warrensburg, but she attended school in Sedalia because there wasn't an educational facility for African-Americans in her hometown. She later enrolled at Lincoln University and paid for her education by scrubbing the college's halls; she graduated second in her class.

She taught elementary classes in Joplin at Lincoln School from 1905 to 1912 and married Charles William Cuther, a longtime head waiter at the Connor Hotel, in 1916.

The Cuthers, along with other local residents, were responsible for elevating the value of Ewert Park. Through their efforts, the park developed into a meeting and recreational place for African-Americans. Today, the three-day Emancipation Days event is still held at Ewert Park.

Cuther also helped found the George Washington Carver National Monument in Diamond by writing letters to Washington, D.C., senators, explaining to them the importance of Carver and the need to preserve his legacy. During the late 1940s, she directed Carver Day celebrations, and the monument was dedicated in 1953.

In 1951, Cuther established the Carver Nursery School in Ewert Park, offering black children the opportunity to attend preschool for the first time in Joplin. During its first 10 years, the school cared for more than 600 children.

Her dedication to improving opportunities for African-American residents extended beyond her nursery school. She encouraged black children to participate in Joplin's annual Christmas parade, and in 1946, she organized the first African-American Girl Scout troop in the region. She also established the Ewert Park Little League baseball program and served on the board of directors for Lincoln University.

Cuther was also an author and singer. She joined the Blind Boone Concert Co. as a singer and worked as its secretary. While touring, she wrote a biography of John "Blind" Boone — a groundbreaking achievement, as she was the first African-American author to write about the life of a black musician.

Thank you. Thank you, Richards, for removing your name for consideration, thereby removing all politics from it. Thank you, board, for honoring 2 of Joplin's most dedicated educators and activists, each in her own way. Joplin citizens should be proud that this buidling will honor such outstanding women!

One small point, Warrensburg had a grade school for blacks(Howard School), but no high school.