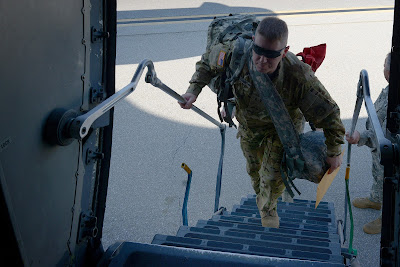 (From the U. S. Department of Defense)

While mobilized, the units are prepared for a wide range of missions, including search and rescue, aerial reconnaissance and equipment and personnel transportation.

The mission is expected to last 30 days.

In addition to this Army National Guard activation, the Missouri Air National Guard's 139th Airlift Wing, based at Rosecrans Air National Guard Base in St. Joseph, has been providing C-130 Hercules tactical airlift for several weeks in support of hurricane response efforts in the Virgin Islands, and at locations in Texas, Florida and Puerto Rico.

(Members of the Missouri Army National Guard board a C-17 Globemaster III transport aircraft at Whiteman Air Force Base, Mo., before departing for the Virgin Islands in support of hurricane relief efforts, Sept. 24, 2017. Air Force photo by Airman Taylor Phifer)
Posted by Randy at 12:06 PM