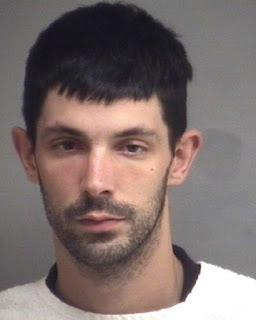 The Joplin Police Department has issued an arrest warrant for Christopher Alred, 31, Springfield, in connection with the attack that took place at my apartment Monday afternoon.

Alred, who formerly worked as a supervisor at the Rangeline Sonic, 1101 S. Range Line, was the subject of Turner Report posts Sunday and Monday noting that he was one of the defendants in a federal sexual harassment lawsuit filed by a former Sonic carhop, that he was facing charges of statutory sodomy for a forced encounter with that same carhop, and that he was charged August 27 with his sixth DWI when the Sarcoxie Police Department arrested him for allegedly driving drunk while his eight-year-old daughter was in the back seat.

The JPD news release is printed below:

We are seeking the arrest of Christopher Alred, 31, for the assault of local blogger Randy Turner.

We know he frequents the area along with the Springfield area.

Our detectives developed probable cause to arrest him yesterday afternoon and he hasn't been located.

So that was the guy. Glad his mugshot was online. Hope you feel better, Randy.

Why was he even walking the streets, let alone working for Sonic? And who was responsible for hiring him? Felony DUI w child in car, felony assault, possible rape. Looks like he will be gone for a while. Hope he gets "hit" in prison.

I guess it's safe to eat and work at Sonic now.

Unless there is another one or two that slipped through the cracks.

This is GREAT, Randy. Let them just keep stacking up charges against him. He'll have the term "rape" redefined for him, shortly....when he hears those big steel bars clunk SHUT behind him.

Hope he winds up rooming with Big Bubba.

Between the sixth drunk driving and the dual quid-pro-rape-quo what the hell was this scummo doing at liberty to commit assault?

Does Loyd Christmas cut his hair?

I posted the correct cure for this; but you did not publish; I'll try again:
Nail him up in an old barn by the scroteum and testicle area real well; then you set the barn on fire:
This gives him an option ( after a fair trial, and guilty beyond shadow of a doubt) I believe Jacques Strapped might concur with this procedure

Hervey you must be sick.

What a sadistic thing to suggest.

People were there cheering the Spanish Inquisition.

People were there cheering lynchings.

The difference between civilized behavior and criminal sadistic vigilantism is small.

Why even bother with a "fair trial" and "guilty beyond a reasonable doubt"?

There wasn't any "reasonable doubt" for those that murdered Emmett Till was there?

Or those that murdered Dock Connelly and Nelson Huey.

To anonymous 9:45( who must be clothed in cowardic to use anonymous as a name;,same as KKK did years ago in the South)


Fair trial is very important. I think its benevolent of me to give the animal an option.


I would remind you that extremism in the defense of liberty is no vice! And let me remind you also that moderation in the pursuit of justice is no virtue.

I'm not sick, the animal doing that is; why my solution is sound!, and very civilized