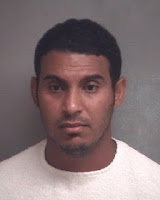 A Joplin man accused of beating his 10-year-old son September 13, waived his formal arraignment Wednesday and pleaded not guilty.

A condition of the bond is that he have no contact with his children.

The next hearing for Amin on the felony child abuse charge is scheduled for 1:30 p.m. October 4 before Judge Joseph Hensley.

According to the probable cause statement, the 10-year-old's sister Joplin police officers that the beating occurred after Amin learned that the boy had said a bad word at school two days earlier and had lied to him about it.

Amin "kicked (the boy) in the stomach, hit (him) several times and used a phone charger to hit (him) which resulted in bruising on his back," according to the probable cause statement, which also indicated that in the past Amin had pointed a loaded gun at his children "threatening to shoot them and used a taser on all three of them."

I guess he will have to kill someone before they take this serious. I imagine he will go back into the same home and continue the abuse.
The laws need to be changed.