Jasper County man who broke into girlfriend's home, threatened her with AR-15, knife sentenced to 22 years 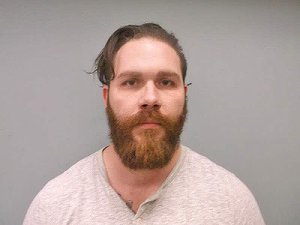 A Jasper County man who broke into his ex-girlfriend's home in Gentry, Arkansas, attacked her and threatened her with an AR-15 was sentenced to 22 years in prison earlier this week.

During the trial, Farmer's former girlfriend Darcy Fisher said in addition to the AR-15, Farmer held a knife to her face and threatened her.


The prosecution presented evidence that Farmer had sent threatening text messages and voice mails to Fisher.

Farmer's mother and former wife testified against him during the penalty phase.

Joseph Nelson, who served with Farmer in the U. S. Marine Corps testified on his behalf, saying he was a leader during his time serving in Iraq. Medical testimony was given that Farmer was suffering from post-traumatic stress syndrome.

Did you personally observe this? No you didn't. Is your story accurate? No it is not. The defense proved that the prosecutors primary witness lied three times on stand. After her fictitious testimony is thrown out Justice will be given to Mr. Farmer. This case lacked an incredible amount of evidence from the prosecution and was purely based on Darcy Fishers fabricated story.

We train our young men to be killers, place them in a position to do what they are trained for, then when they come back stateside, they are just thrown back into society and we expect them to act as if nothing ever happened. This is a result of what war does to people. They are never the same again.
I am not saying his behavior should go unpunished, but he is a veteran. Let's get him the help he deserves. Locking him up in prison for 22 years is not the answer.

I could not agree more with the above post... I hope this man is granted an appeal and receives the help he should have

This girl is a total liar! She breaks in his home, steals items, one which was his AR. She took that because she knew exactly how she would be able to set him up. I bet she has trouble sleeping at night with her lies. As for the voice mails he left her, they leave out the part where she was sending him msg's fueling him to get him to that point. She is a disgrace.