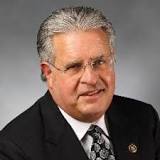 Joplin Mayor Michael Seibert thought it was a wonderful idea and the City Council eventually backed the proposal to recommend to the Joplin R-8 Board of Education that it name the Early Childhood Center after Sen. Ron Richard, R-Joplin.

That is exactly what the Joplin City Council, prodded by Mayor Michael Seibert, recommended to the R-8 Board of Education last week.

The other two finalists are the late Melissa Fuell Cuthert, who founded Carver Nursery School in Ewert Park in 1951 and the late Stephanie Stevens, who worked in early childhood education for the R-8 District.

The reason given for Richard's nomination is that he was able to maintain money to make the building possible.

The Naming Committee will likely come up with a recommendation when it meets 5 p.m. Monday at the Memorial Education Center.

I am so disappointed that Councilman Jim West didn't take more of a leadership role in this and get the building named after Cuther. Why would he abstain from the voting?

How about "The Boondoggle Center for Early Childhood Indoctrination"? And I KNOW it's being paid for with grant money. But only the truly naïve do not know where "grant" money truly originates from.

Why name it after anyone at all?

Mr. Richard did nothing more than what a legislator is supposed to do for his/her constituency. The other two candidates are so much more deserving!

Why does it have to have a name attached. It can be risky business. Remember UMC had to remove the names from two of their buildings honoring Ken Lay and Paige Laurie.....

Naming it after the founder of a nursery school would be more appropriate because that would link it to the history of education in Joplin. Whatever the committee decides,I only hope they don't come up with some convoluted name like "Soaring Heights." Students may soar to new heights--and we certainly want them to do that--but"heights" don't soar.

My child once attended "Plummeting Scores" aka Soaring Heights Elementary. Not for long. It really shakes your confidence when the principal then (and currently), has trouble with the pronunciation of words in a 4th grade spelling bee.

The name of this place will get changed when Richard is indicted. He's a crooked as they come in Jefferson City. His day will come.

Soaring Eagletts would be a good name.
I hope they teach s foreign ( simultaneously) language in the school