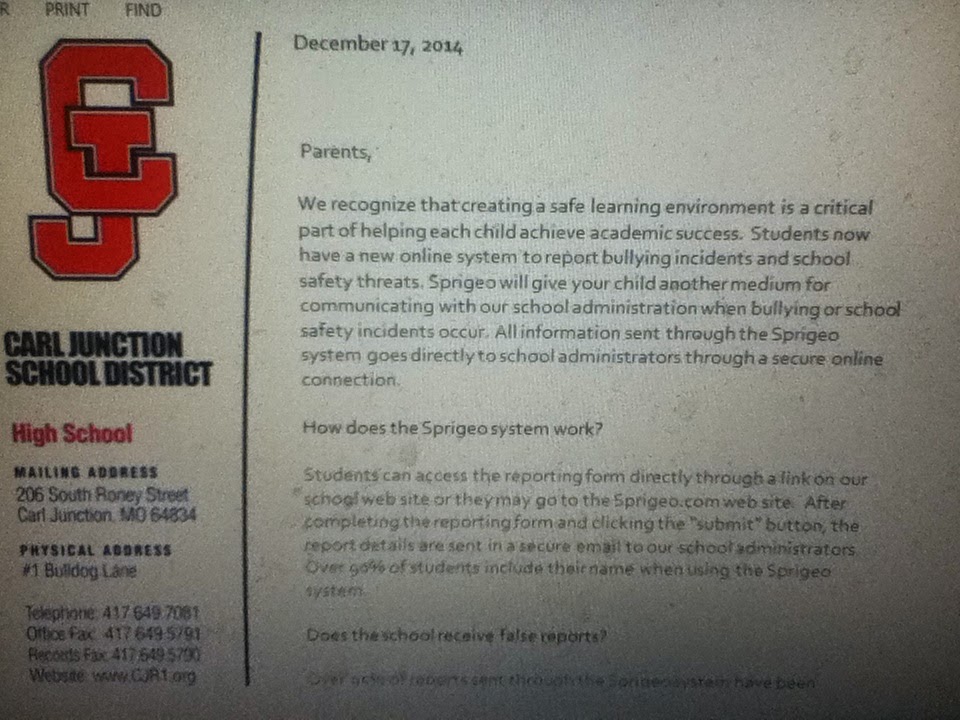 After taking a hit for the past several days following a Turner Report post that revealed Superintendent Phil Cook of the Carl Junction R-1 School District had eliminated some anti-bullying efforts due to the lawsuit filed against the district by the family of 13-year-old Luke Nugent, the district has announced a new anti-bullying program.


We recognize that creating a safe learning environment is a critical part of helping each child achieve academic success. Students now have a new online system to report bullying incidents and school safety threats.

Sprigeo will give your child another medium for communicating with our school administration when bullying or school safety incidents occur. All information sent through the Sprigeo system goes directly to school administrators through a secure online connection.


How does the Sprigeo system work?


Does the school receive false reports?

Over 95% of reports sent through the Sprigeo system have been confirmed as authentic requests for help with a bullying incident or school safety threat. Unlike text messages or Facebook posts that can be shared among students, all Sprigeo reports are viewable only by school administrators. This minimizes the impact one student has in falsely accusing another student or abusing the reporting system.


Why is there a need for an online reporting system?

The Sprigeo reporting form can be accessed from the privacy of a home computer or other internet equipped device and provides yet one more way in which a student can seek help or notify school officials of possible threats. Press the Ctrl key and click on the Sprigeo link below to visit the reporting system’s home page.

Superintendent Phil Cook acknowledged in an April deposition for the Nugent lawsuit that he had ended anti-bullying initiatives for fear they would damage the district's position in the lawsuit.

Cook eliminated an anti-bullying task force after it had held only three meetings:

"Well, we already knew we had a lawsuit when we started the task force. But as we got into it, we didn't want to do something that came back and said, 'Well, you guys were reactionary and did this or that.'
'"We feel like as a district we've done quite a bit to address bullying and train people in bullying."

Cook also acknowledged that he had stopped a questionnaire being given through another program because it was asking "bad questions." The questions were designed to help in creating an anti-bullying culture.