The Best Christmas They Ever Had 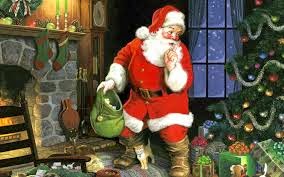 (My column for this week's Newton County News)

The last time eight-year-old Jimmy had seen anything like this was on a TV show.

Somehow it's not the same when the police cars are surrounding your home, red lights shining through your windows, the sound of sirens punctuating the crisp evening air.

Even on television, Jimmy had never experienced anything like what was going on his family's living room.

"Keep your hands up," a policeman said to the jolly old fat man in the red suit who was standing by Jimmy's Christmas tree, a giant bag beside him.

"You're under arrest for burglary and trespassing. You have the right to remain silent."

" All these hoes, Ben," one of the officers said to the other. "Should we add a charge of prostitution?"

Jimmy felt a tug on his shirt. His little sister Jenny had entered the room and was hiding behind him.'

"It's Santa," she whispered to her brother.

"Joe," Officer Ben said, "it sounds like the little girl knows this guy."

A call came in on Officer Ben's radio. "You have to be kidding!"

"What is it?" Officer Joe asked.

"You say he sees you when you're sleeping. He is a peeping tom. He knows when you've been bad or good." He looked at Jimmy. "And he's got eyes on your mom."

Joe threw Santa to the ground and handcuffed him. "You freak! She's just a little girl."

"No, ho ho," Santa said. "You don't understand. Millions of kids sit on my lap and tell me what they want. And if they've been good I come into their houses and leave something under their tree."

A third officer entered from the kitchen. "I've been talking to the parents," he said. "This guy stole some milk and cookies."

"From the looks of him, he's stolen a lot of milk and cookies."

"He was planning to make his getaway through the chimney. He left a team of reindeer on the roof and from the looks of it, the reindeer left something on the roof, too. We also found this computer. This guy not only sees them when they're sleeping and is a peeping tom, but here's how he knows if they're bad or good- It's all on CD Rom."

"You have to let me go," Santa said. "I have all of these gifts in my bag and I have to deliver them to good little boys and girls all over the world."

Joe started leading him out of Jimmy's living room. "You're not going anywhere tonight, buddy."

"He won't bother you any more, kid. They don't take kindly to his type in prison."

Jimmy started to argue when Officer Ben said. "What are we going to do with this big bag of toys? We don't have room for that."

Officer Joe looked at Jimmy and Jenny. "Let's save ourselves some paperwork. Give the toys to these two kids. Now, kid, what were you going to say about this guy?"

Jimmy hesitated, then spoke. "Nothing, sir. He scares me."

Joe said, "Get him out of here. Add intimidating a witness to the charges."

As the officers took the jolly fat man out of their home, Jimmy and Jenny began opening their gifts.

It was the best Christmas they ever had.
Posted by Randy at 6:45 AM