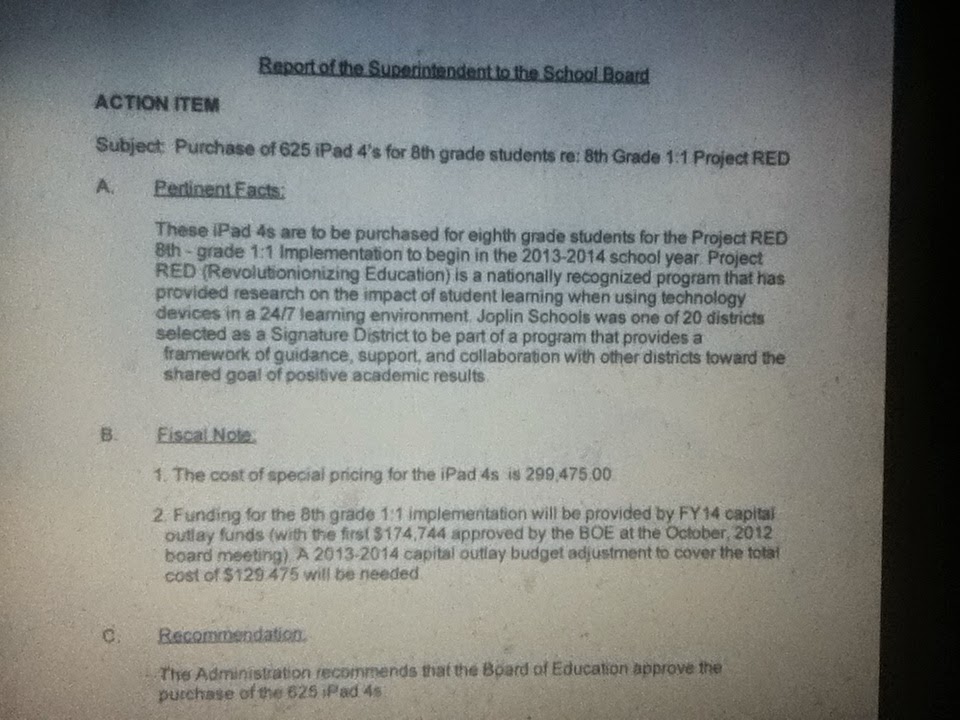 When Joplin R-8 Board of Education members approve the spending of $103,000 to buy keyboards for eighth graders' iPads, it will mark the latest development in a project that started with a single-source bid for $174,744 and has cost the district more than half a million to this point.

The iPads for eighth graders push began shortly after laptops were given to all Joplin High School students.

It was sold as a bargain to the Board of Education at its October 30, 2012 meeting because the district had earned a spot as a  "signature" or pilot school in Project Red, a national experiment designed to effectively implement technology in school districts. The board was told that Joplin was one of 20 school districts chosen to participate and that Project Red would provide district teachers with "consultation, training, and collaboration with other signature districts."

Board documentation, signed off on by Superintendent C. J. Huff, Assistant Superintendent Angie Besendorfer, and Director of Technology Traci House explained why it had to be iPads:

Deciding on one product and not putting the project up for bids allowed Apple to set the price. The board was told the price would be $174,744, but that did not turn out to be the case.

The proposal was made after the district had already provided all teachers at East Middle School with iPads. The announcement was made at an East faculty meeting, in which principals Bud Sexson and Jason Weaver explained that upper administration had approved the plan we, the EMS teachers, had supported to give teachers iPads instead of putting Smartboards in the warehouse school the district moved us into following the tornado.

Most of the teachers, including me, were totally unaware that we had wholeheartedly supported this concept. In face, it was the first we had heard of it.

Without any OK from the board of education, the C. J. Huff Adminstration was already moving to get iPads for seventh and sixth graders, according to the district's 2012 Race to the Top application. In it, the Administration asked for $1 million for iPads, naming that device specifically. The proposal was rejected.

At the June 2013 board meeting, board members were told that the $174,744 they had approved in October 2012, was just a down payment on the eighth graders' iPads, and the taxpayers would have to spend an additional $129,475 to pay for 625 iPads. This passed, without questions, by a unanimous vote. That brought the cost for the iPads for eighth graders up to $304,219.

But even that did not cover the whole cost. That night, the board approved $20,000 to buy covers for the iPads. Combined with the  $103,000 cost for the keyboards and the costs for the teacher IPads, after Tuesday night, taxpayers will have spent more than half a million dollars without taking any competitive bids.

Auditors, are you paying attention?
***

All huff does is spend money. Why isn't this stopped. This district will be in debt from him for decades.