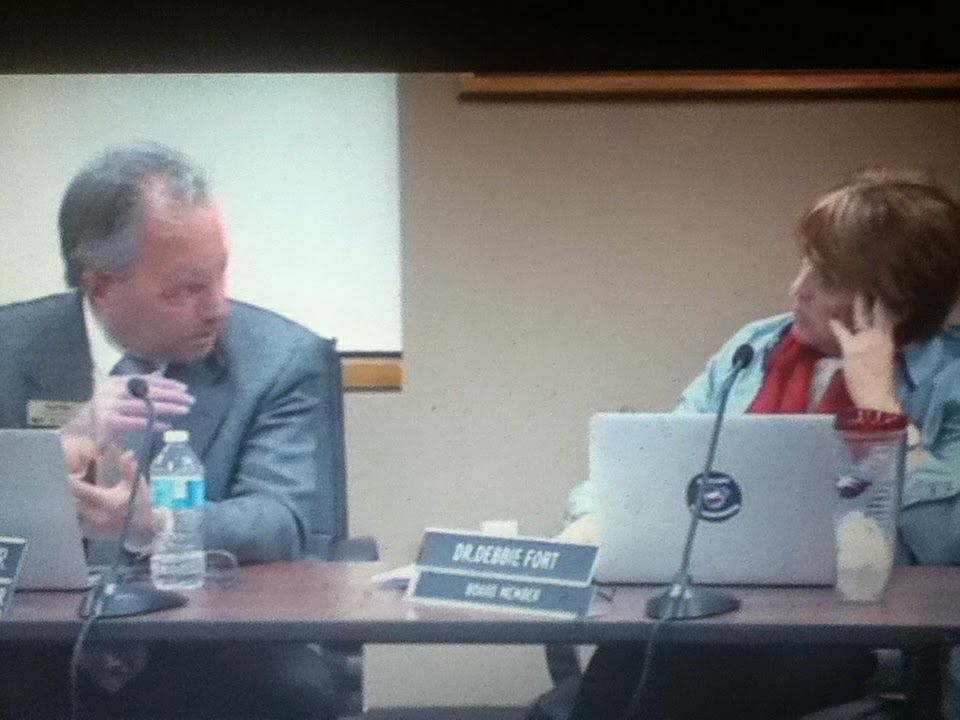 Everybody makes mistakes, he added.

Then he told the Joplin R-8 Board of Education that the mistake in not getting the right colors for seats in the new Joplin High School gymnasium was made by the design team.

The mistake will cost the taxpayers more than $95,000, the cost for replacing the wrong-colored seats. The board approved that cost by a 6-1 vote with Debbie Fort casting the dissenting vote.

That vote followed a convoluted explanation by Huff over how he would fix it so it did not end up costing the district anywhere near that much.

"I'll try to walk you through this," Huff said, as if he were talking to a group of kindergarten students who did not understand high finance as well as he does.

Huff said some of the seats would be placed in the high school's third gymnasium and others would go to elementary school saferooms. And even better, he said, other school districts, including Carthage and one in Arkansas, were clamoring to buy the seats, which would further cut the costs.

How much can be made that way is uncertain, Huff said. "Until the check's in the bank, it's hard to say."

Fort asked several questions about the expenditure, asking Chief Financial Officer Paul Barr about where the money would come from. When Barr said it would come from the capital outlay fund, Fort asked if this was part of the $45 million the district borrowed a couple of months ago.

Barr said it was.

"Was that included in the money that we borrowed?" Fort asked.

Just wondering, since high finance was not my forte in school, how does a school district borrow 45M dollars? Did the voters approve this measure on top of the 60M bond issue? 3507

Time to start laying off teachers and hiring more "planners" at admin.

Imagine what he could do for the state...or dare I say the country.

This is so stupid. What safe rooms are these going to go in considering all but what 3 are complete? And if other districts want to buy them garntee they won't pay much for them. Why would you even install these if they were wrong or not right? Just a joke

CJ stated that when the chairs arrived that they knew that they were the wrong color. So, why would they go ahead and install them? Who made the decision to have the chairs removed?

Who cares what color they are, they are just seats. How is spending $95,000 on seats teaching our children how to deal with a mistake. We dont just make everyone pay because one person made a mistake. We should not be paying that much for a color change. If the seats do the job of being seats then no money should be spent, not for something cosmetic.

It is actually a very simple formula:

Charlie Huff...more buck for the bang.

I guess Kimbrough voted with his Kimbros. I am glad his spineless ass isn't running.

We need leaders, not lemmings.

Being a leader takes grit...three more Forts, and this district could rejoin the living.

I wish the Turner Automatic Response Desk would hurry up and respond on here. I can't wait to hear the "leave Dr. Huff alone, you are lucky to have him, Turner picked the colors, it is all a lie, blah blah blah" spin cycle.

We knowingly installed the wrong seats so we could proclaim to the heavens that "school started on time...ish." We KNEW we would come back and fix it...Buy now/pay later. This is how this administration works. And they are encouraged to do so because this town elected five total morons who hand picked one imbecile. That is six absentee overseers of the idiot with a Napolean complex running amok with his limitless R8 charge card. The bill is coming.

One huge mistake and that was hiring Huff no two mistakes one hiring him and one not firing him. Everything he does is wrong why would we think otherwise. 45 million dollars in debt that is criminal

I have to say once again "Thank you Dr. Fort", for at least asking the questions and taking the right stand. I can't believe the stupidity of this. This "whoopsy daisy" attitude about thousands of dollars wasted is beyond me. I'm sure if a lowly support staff member made an error a fraction of this one, they'd be out the door. At the very least and I do mean very least Mike Johnson should be fired. I think CJ, Sharp and Landis are relying on a huge increase in next year's tax levy to help cover them, but at some point (if not already) people will leave Joplin. It's so vitally important that we not re-elect Annie Sharp to the board.

So who are the members of this faceless design team that screwed up?

Mike Johnson should NOT be fired!

He should have been rotting in prison for years now.

Amen! I sure feel sorry for his wife. She is such a nice person. Maybe Huff and MJ can be cell mates!