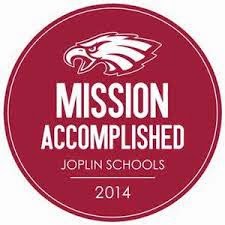 Lost in all of the controversy over the Joplin R-8 Board of Education's decision to pay $95,000 to get the right color of seats in the high school gymnasium, was another, even larger expenditure that was approved as part of the consent agenda.

With a bare minimum of discussion, the board approved spending $103,000 for keyboards for the iPads being used by eighth graders and at one of the elementary schools.

If the keyboards were being used to facilitate more in-depth writing assignments, that would be one thing.

C. J. Huff Administration officials acknowledged during the meeting Tuesday night that the money was being paid so the students could take the Common Core tests that will be given next spring (though, of course, the words Common Core were not used since they seem to think calling it "new standards" will fool us). With the status of Common Core in Missouri up in the air, the board may very well have paid out a six-figure sum to take a one-time only test.

An article earlier this week at Politico noted the efforts that are being made to fight Common Core testing in the Show-Me State.

The article reviews the recent restraining order Common Core opponents were able to get against the Smarter Balanced Assessment Consortium, which is providing the tests, which are scheduled to be given for the first time this year.

Since new Missouri standards are being written, there is no guarantee that there will ever be another Common Core test, or that whatever standards Missouri uses will require all testing to be done online.

Taking that into consideration, the Huff Administration could have opted for some minor inconvenience and conducted eighth grade testing on a different day, perhaps importing laptops that are being used in other schools for the testing.

Certainly there was no desperate need to pay $103,000 for keyboards for iPads, which were a questionable expenditure in the first place.

At a time when the district has just had to borrow $45 million to cover $8 million of might-as-well spending and $5 to $12 million of extras on the new buildings that to this point do not appear to have been approved by FEMA, it seems like it would have been a wise time to have delayed spending another $103,000.

If students are to take computerized tests then they would need to practice regularly so the test isn't about their computer skills. That would be aa reason for the keyboards.
From a tech standpoint, bringing in laptops to use for the testing would involve some major set up. The district doesn't have the manpower to do that.
The whole testing thing is just wrong. It's nothing but a big money scam by test/publishing companies and another way for the government to mess in our kids' education. Maybe N. Korea can take out the testing system.

This money and the money for the seats are but drops in the bucket of wasted millions. But every drop counts. If they have iPads then they do need keyboards. That should have been a given from the start. They had some keyboards at East, but they were not programmed for any individual iPad, so half the writing time was wasted trying to match student iPads to keyboards. Like most things done at R8, this was don7015e poorly with little foresight into the implementation of the mess made. But you teachers keep those scores up and failures down! You betcha.

There was a time when a few medical doctors became rich by writing prescriptions for any drug addict that asked. The pharmaceutical companies would give that doctor "kickbacks" for each "script." John Q paid through higher premiums, taxes for medicaid, taxes for police, courts and prisons, and an increasingly unsafe society.

One can't help but wonder, with all of the. "construction" and real estate dealing going on, and all of the buddy-buddy going on between the little guy running the district and the little (construction) guy on the board, if there are some shady goings on around here.

They had some keyboards at East, but they were not programmed for any individual iPad, so half the writing time was wasted trying to match student iPads to keyboards.

While I'm sure this could be better handled in a number of ways, that's pretty much inherent in adding keyboards to tablets. They normally communicate with a very useful short range radio protocol called Bluetooth, but it's not that short range. The keyboards and iPads would likely be confused as to which each should be talking to in a classroom setting without assignments.

So of course the question is, why can't reassignment be done in a snap, for example you run a program on the iPad and type something it provides into the keyboard, so it knows which to talk to until another assignment, or why don't the devices have labels and storage so that matching up won't take long?

Of course, more fundamentally, why did the district buy these iPads which really aren't all that useful in schools, they're made for consumers of information, not creators. An opinion that they can be used for writing without a keyboard does not automatically equal reality.