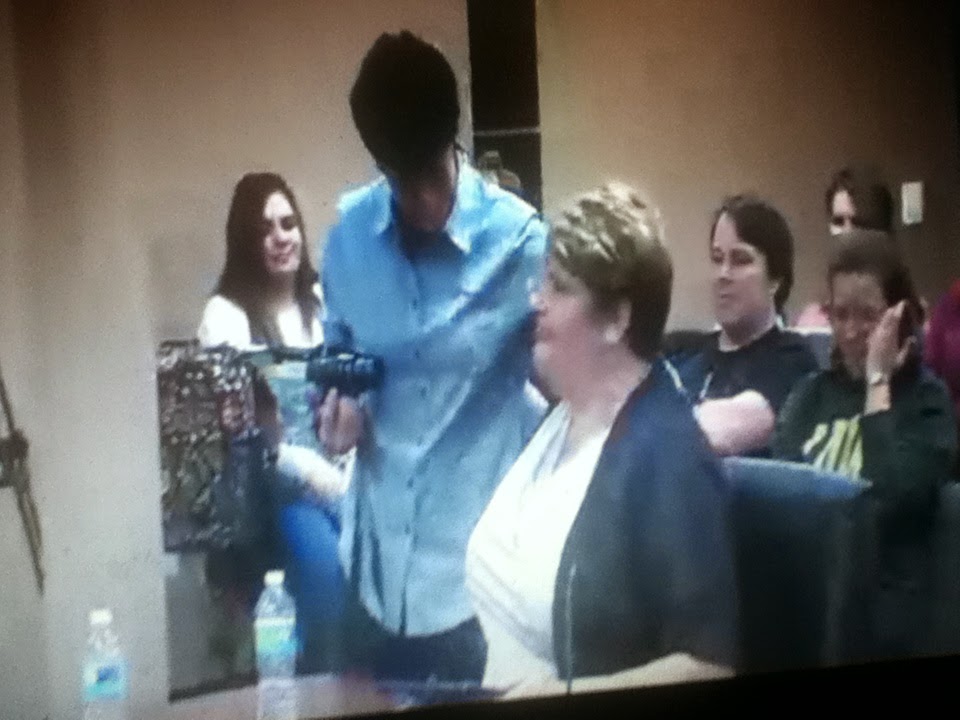 It wasn't supposed to happen that way.

The Joplin Globe did not report about it.

KZRG did not mention a word of it.

You didn't hear it on any of the local television stations.

In order for the Joplin R-8 Board of Education to even be able to discuss the $95,000 expenditure to replace wrong-colored seats in the new JHS gymnasium, the item had to be removed from the consent agenda.

In preparing the agenda, Superintendent C. J. Huff and Board President Anne Sharp, the two individuals who create the agenda each month, made a conscious decision to put this expenditure in a place where it normally would simply not be mentioned during the televised public board meeting. The consent agenda is designed for routine items for which there is no need for discussion.

However, when the public discovered that the C. J. Huff Administration's error (And make no mistake about it, he can talk about the creative team all he wants, but in the land of Harry S Truman, we do not accept mealy-mouthed leaders who will never admit they are wrong. The buck stopped with C. J. Huff.) was going to cost the taxpayers nearly $100,000, the anger began to build.

Whether it was that anger, or whether it was another one of the cases which have been occurring frequently the past few months when board member Debbie Fort notices something that should not be simply passed without discussion, I do not know.

What is painfully obvious is that C. J. Huff and Anne Sharp planned on this item slipping through with the public being none the wiser.

Unfortunately for them, the system that they have twisted nearly beyond recognition for the past six and a half years is finally beginning to work. Board members, at least one, Debbie Fort, and sometimes more than one, are questioning the way tax money is being spent. The public is starting to get involved, and for the second straight year, we will have choices when we go to the polls in April.

Nearly all of the attention was focused on the gymnasium seat issue, but there were other problems that slipped past the media, which should be questioned.

-No Bids for School Attorney Board Attorney John Nicholas was at his last meeting. Nicholas, who will be a circuit court judge, will be replaced by Norman Rouse, who was introduced at the meeting. I don't recall the position being put out for bid. In fact, the board has had the same attorney for the past 19 years. Nothing against Rouse, but how do we know the taxpayers couldn't have received professional representation at a lower cost?

-Do We Ever Put Annual Audit Up for Bid? The board listened to the annual audit presented by a representative of Mense, Churchwell, and Mense. When was the last time, the audit was put up for bid? It is recommended generally that the job be put up for bid every three years.

-IPads Have Cost Half a Million- Another item on the consent agenda was briefly discussed. The board, by a 7-0 vote when it approved the consent agenda, agreed to pay $103,000 to keyboards for the eighth grade iPads. A few days ago, I wrote about how those iPads, which were presented to the board as costing $174,000, have ended up costing the district more than half a million at this point. No bids were ever taken on the iPads and that has cost us money ever since.

-$103,000 So They Can Take One Test- One problem with buying iPads for eighth graders without keyboards is that you cannot do writing assignments on them (no matter what East Middle School Principal Bud Sexson says). We found out last night that writing assignments have nothing to do with the $103,000 expenditure. We have to do it, we were told, because we have to have the keyboards in order to take the standardized tests next spring, and even though the words were only mentioned once during last night's meeting, this is all about Common Core. Common Core tests have to be done online, which means districts across the state are spending money. It seems strange that we are spending this kind of money, when the legislature passed a bill that requires Missouri to create new learning standards. Are we paying $103,000 so our students can be tested one time?

-Time to Practice, Less for Learning Another worrisome comment was made at last night's meeting. The board was told that the keyboards would arrive in time for the students to get plenty of practice on them. In other words, plenty of time that will be taken away from learning.

-Manipulating the Media One of the hallmarks of the C. J. Huff era has been a steady force feeding of propaganda during the meeting. Last night, the practice was not only continued, but one of the speakers actually bragged about it. Kim Vann is no longer with the R-8 School District, but the woman who primarily served as C. J. Huff's executive secretary, wasted time promoting Huff, though not by name. She praised Bright Futures and she talked about all of the favorable publicity the school district has received, bragging about, though she did not use the words, how the media has been manipulated.

-A Plaque for Kim Vann In honor of her four years in the school district, she was presented with a plaque and received hugs from C. J. Huff and Anne Sharp. In other words, she received far more attention for four years, which are being heavily scrutinized by state auditors, than teachers and staff members who gave more than three decades of their lives to the district.

-Interesting Expenditures- Among the items the board approved in the monthly bills- $4,710 for the Core Collaborative professional development, $85.59 to Charlie's Chicken, listed as "miscellaneous supplies," $103 to Chick-Fil-A for an "MSBA board meeting," $11,676.25 for "Visible Learning Workbooks" listed under "convention and travel," and $850 to the Victory Ministry and Sports Complex for "Use of Victory Gym for Choir Practice."

-Any Mention of Common Core Except, memorably, by McKinley Elementary Principal Terri Hart during her presentation and she quickly corrected herself and said "the new learning standards." C. J. Huff seems to think we are too stupid to know that they are pushing full speed ahead with Common Core Standards.

(Photo: A touching moment between Kim Vann and R-8 Board President Anne Sharp)
Posted by Randy at 6:13 PM

No one, including the students, cares what color the seats are. If there was an issue, it should have been dealt with when the seats were being INSTALLED. Spending almost $100,000 of TAXPAYER money on this is simply WRONG.

If Huff and members of the board are so very bothered by the color of those seats, they should feel free to replace them as long as they are willing to pay for it OUT OF THEIR OWN POCKETS!

Also, if Huff is like most superintendents, he has a three year contract which is renewed annually every January.
The board can go ahead and add this year back, validating that the district is moving forward satisfactorily. The can rehire him for next year without giving him that third year back, which says they have some concerns about the direction the district is heading.
The third option, which they will not consider, is to terminate him and pay him for the two years remaining on his contract.

Is the contract a secret?

If it is not a secret, then where can it be seen?

Contract is available a a FOIA document. As for the seats.... I'm sure they didn't put them all in at one time....Someone would have seen and noticed they were WRONG!!

CJ Huff has just got to go. I don't think the public or the schools can survive much longer. It would be best to not wait until April and make a new board do the deed of dismissing this overinflated puff of vanity. Please, don't renew his contract in January. There is plenty of evidence that the district has failed under his lack of leadership, and he has already demonstrated that he will leave Joplin if something comes along that makes him look even bigger and better. So, send this jackass down the road so we can get a fresh start. There truly is no time to spare.

Caption under picture should read:

Oh, thank you, Kim Vann! I don't know how we would have hidden and wasted all of that donated money without your faithful assistance. What a service you have provided to a few of us!"

Eh, I'd rather have my skimpy plant for 30 years of service than a hug from CJ and Anne. I suffered enough degradation in my years of service without being sent off to the pasture that way.

You know, birds of a feather flock together. This flock is called a pack of thieves.

They did know the seats were the wrong color but the shipping back and replacing cost too much. I'm guessing someone changed their mind.

In order to save time and valuable manhours, please accept our initial lie for any given situation uncovered by unauthorized sources.

This is in the best interest of the children.

Do we as taxpayers, parents, students, or teachers have any say in Huffs position? Is there anyway to get him out of our school without the board?