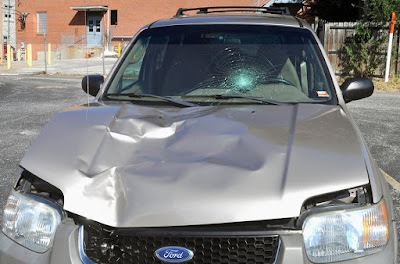 Felony leaving the scene of an accident charges were filed today against Oren Rea Rinehart, 61, Neosho, in connection with the September 12 hit-and-run death of Matthew Stevens, Neosho. 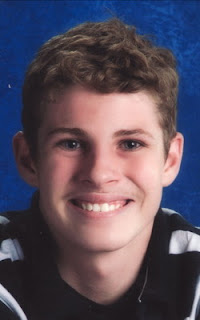 "Based on this interview," according to a news release, "Neosho Police have seized a 2001 Ford Escape with extensive front end damage believed to be the vehicle involved in the accident. (The car is shown in the accompanying photo.)

The crime was detailed in an earlier Police Department news release:

At 1:13 a.m. Saturday, Sept. 12, Neosho officers were dispatched to the area of Highway 59 and Malcom Mosby Drive in reference to a male lying in the middle of the highway. When officers arrived they located a Matthew Brooks Stevens (pictured), age 19, lying in the roadway, and he appeared to have been struck by a vehicle. The suspect vehicle had fled the scene. Paramedics arrived on scene and confirmed Mr. Stevens was dead on arrival.

On September 14 an autopsy was performed on Mr. Stevens at Cox South in Springfield, MO. Results indicated Mr. Stevens had obtained injuries resulting from being hit by a vehicle from behind.

(Note: The Stevens family asked that the photo of the suspect vehicle be circulated in case anyone else has any information about the death.)
Posted by Randy at 4:53 PM

The driver was drunk... no doubt about it! He should be charged with murder!

An here are his current charges...REALLY???

Has no one wonder wtf this kid was doing walking in the middle of the street at 1am?

Ross will get him off

The question isnt why a teenager was walking down the road at 1am, the real question is why a 61 year old felt it was okay to leave a child lying on the road to die.

lol, great come back, still the original question remains, why was this kid walking down the road at 1 am?

In case you were legitimately curious, he was walking down the road at 1 am because he was leaving a friends house. The 20 year old had no license and thus walked back.