Some thoughts about the changing landmarks of our youth, Turner Report comments and top posts for the week 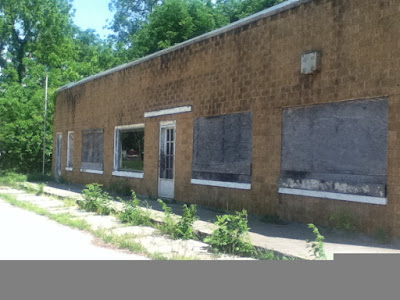 During a brief portion of my teenage years, I proudly carried a white bag that was filled with Grit newspapers and delivered them to 33 customers on my route.

It wasn't great money, but each Wednesday morning, I would arrive at the Newtonia Post Office, where either Carroll Gum or Vernie Browning would leave the package containing the newspapers on the floor right by the swinging door that led into the Post Office.

I reached under the door, picked up my newspapers and over the next day or two, I followed in the tradition of such famed former Grit delivery boys as President Gerald Ford and home run king Hank Aaron and made sure my customers received their news.


In addition to the share of the subscription money that delivery boys received, you also could qualify for prizes and the first prize I ever earned was a camera. I don't remember the type of camera it was. It was not a particularly good one, but while it worked I took a number of photos, including one of a busy, thriving Gum Mercantile, the combination general store/post office that was the center of life for Newtonia in the days I was growing up.

I originally planned to use that photo as the cover for my new book Newton County Memories, but I was unable to locate it, so I ended up using a photo of the Neosho Square.

Still, I wanted to take a look at the old building where I spent a great deal of my youth, something I mentioned in numerous places in the book. It was where I waited for the Bookmobile in the summer, waited for the Neosho Daily News to arrive every day, and on cold winter days, sat in the back with my friends, making sure to get my favorite chair, a wooden chair with chipped blue paint that had seen better days.

It was the place where I served as the master of ceremonies for the activities at the first Newtonia Fall Festival and gathered every evening in the summer after the ballgames were over to talk over baseball, girls and the meaning of life, which at that time to me was baseball and girls.

Without the picture I took with my sadly deficient, but still hard-earned Grit camera, I decided to relive my memories of Gum's Store (no one ever called it Gum Mercantile thought that was the name above the door). I drive by it whenever I visit my parents who have lived in Newtonia for 67 years, but I wanted to stop and take a good look.

It is difficult to look at the old brick today. It had always been busy throughout the days when I was growing up. People came to get the morning mail, the Neosho Nurseries workers stopped by at lunch for Carroll, Vernie or Marie Ferguson to make them sandwiches, then at about 3:30 p.m. everyone arrived to await the afternoon mail and the Daily.


Now, there is no store, there is no post office (Newtonia residents are now in Stark City's zip code) and the Neosho Nurseries is just a memory.

As I walked around the building, taking photos from different angles, I saw a side door was open. I was sorely tempted to enter, but thought better of it, especially when I heard voices from the back. I had wondered what happened to the Gum Mercantile sign, which had remained over the store long after it was purchased by different owners and then went out of business.

I saw the answer to my question as I glanced through the open door. It was lying across a table and appeared to be in good shape- far better than the store.

As I stood there, I thought about the other places, Hamilton's Grocery in Stark City, Kistler Grocery in Ritchey, the Dairy Dip in Granby, the Brown Derby, Reta's the places of my youth. Some of the buildings still exist for those places that I remember so vividly from a half century ago. I am sure that in another 50 years, people will look back nostalgically on the buildings from their past.

Apparently, I am not the only one who has an interest in the people and places of yesteryear. I have been gratified by the positive reception to Newton County Memories. Thanks to those of you who have already ordered your copies. Please let me know what you think about it and please share your memories of Newton County with me.

The book is available in both paperback and e-book formats. Amazon links can be found below the listing of the top 10 posts this week on the Turner Report, Inside Joplin and Inside Joplin Obituaries.

I received an e-mail this morning from a woman who asked me if I had stopped printing comments on the Turner Report. She noted that there had not been any for more than a week. Since I also receive plenty of comments on my Facebook page and on the Inside Joplin Facebook page, I had not even noticed.

At some point, I apparently stopped receiving e-mails telling me when there was a new comment to moderate. I went back in and published a couple of weeks' worth of comments and until I figure out what went wrong with the e-mail notification system, I will keep an eye on the unmoderated comments through Blogger.

I apologize for those who thought their comments were being rejected or that I had stopped printing comments.

1. Greitens: I quit, but let me whine about it for a while

3. In one of last acts as governor, Greitens pardons woman who killed abusive rapist father, four others

4. Probable cause; Carthage man left loaded pistol out in the open; five-year-old shoots dog with it

8. State auditor on resignation: Greitens' corruption must be cleaned up and our sate's reputation restored

10. State Treasurer on Greitens resignation: Missourians must come together and work toward a better future

3. Carthage Police: Who is this guy?


Help the Turner Report/Inside Joplin continue to provide a much-needed alternative news source for the Joplin area. If you feel this independent news operation benefits you and this area, please consider taking a subscription or making a contribution of any amount by using the PayPal buttons below or by mailing a contribution to Randy Turner, 2306 E. 8th, Apt. G, Joplin, MO 64801

This problem has to do with changes necessary to comply with new European GDPR online provacy rules.