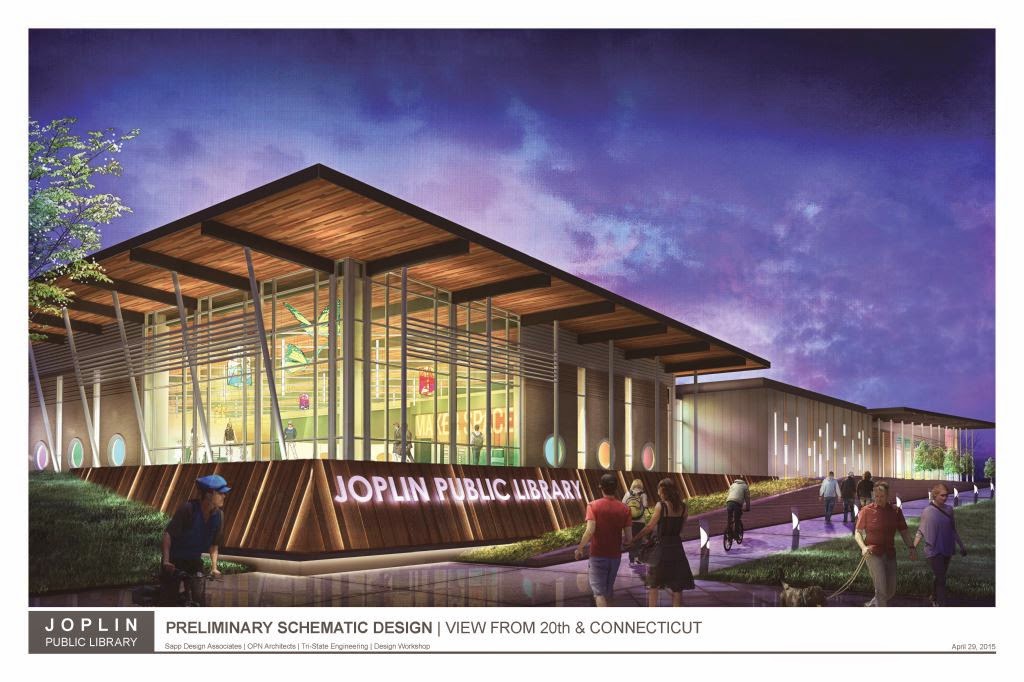 Citizens and interested stakeholders viewed the plans for the new Joplin Public Library as progress continues in the relocation and development of this facility to the northeast corner of 20th and Connecticut Streets. Two Open House meetings were held Wednesday, April 29 at the current Library location, 300 Main Street.

Library Director Jacque Gage and others on the Library and City staff attended these meetings to talk with citizens and discuss the plans for this new facility. Representatives from the project team, including architect for the project, SAPP Design Associates (SDA), also were at the meetings to provide insight on the ongoing design work. The team has held a series of meetings with stakeholders to solicit the community’s ideas and requests which has focused on an adaptable, accessible and vibrant facility for Joplin. Information about this process was displayed at the open house, depicting the collaborative efforts that have taken place as the architectural elements of the Library and its surrounding grounds area are designed.

SDA of Springfield, Mo., is also working with OPN Architects of Cedar Rapids, Iowa which has been added to their team for this project. SDA officials noted OPN brings added depth to the planning process, as well as their special appreciation for a city in recovery, as OPN was selected for the planning and design of the new Cedar Rapids library after it was destroyed by devastating floods in 2008.

The Library project is a partnership with the Economic Development Administration, which awarded the City a $20 million grant to assist in the redevelopment of the 20th Street area following the 2011 disaster. The project will include site infrastructure repairs and improvements, as well as the new facility. It is a matching grant from EDA of 80% to 20% City resources, the City will fund $5 million of the project, which includes the land value of property that the City owns at 20th and Connecticut.

TriState Engineering of Joplin is currently working on civil site design, and construction is planned for fall 2015.

A work session with the Joplin City Council to discuss the plans of the Library is scheduled for May 11, 2015.
Posted by Randy at 3:30 PM

No backpacks allowed. Everyone must have a valid library card to enter.

One of the best things going right now I think.

As ugly as the new schools--are people blind?

You are a clown