Joplin Police: You may be committing a crime if you access JHS dropbox site 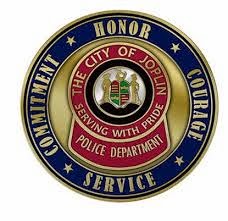 The Joplin Police Department has updated its news release from last night to let the public know that if you access the Dropbox site containing naked photos of Joplin High School students you may be committing a crime.

Here is the Police Department release:

On April 14, 2015, the Joplin Police Department responded to the Joplin School District in reference to some possible inappropriate pictures that were found on a student’s phone.

We have been made aware of information concerning this investigation, that has been put on social media, that is inaccurate. That information was never confirmed by the police department.

As this situation develops and more information becomes available for release, we will send updates out to the media. We would like to caution, that if a family member has received the suspected Dropboxlink, knowingly opening the link or sharing it could constitute a crime.
Posted by Randy at 7:39 AM

And we all know that the police department would NEVER lie.

So let's disable to drop box link all together. Doesn't JPD have a Cyber Crimes Team? Isn't that what they do??

We would like to caution, that if a family member has received the suspected Dropboxlink, knowingly opening the link or sharing it could constitute a crime.

Which as far as I know is wrong. Or at least when I've downloaded files from Dropbox without having an account, a link to a particular one gives you the option of downloading it, which indeed might be a crime in this case, or "Save to my Dropbox", which I assume adds it to your Dropbox account.

This help entry also makes it clear that folders of Dropbox items can be shared, which is what I assume has been going on. Just looking at a list of files in a folder is also not any crime I'm aware of.

But if an attempt is being made to suppress knowledge of the extent of this before a court order can be sent to Dropbox to end public access of these files, that is, for example to discourage parents from looking at file names and guessing if any of them are their daughters', well, such a vague threat might indicate something other than computer illiteracy on the part of the Department.

Yes they have a cyber crimes taskforce....kind of.

I'm still trying to understand why you have not issued an apology for printing false information about kids being arrested, when the police and the school have said there were no arrests made. You got it wrong Turner, now do the right thing in owning up to it. You expect other people to, why not yourself????????????

I heard there was a lock down after school today. Anybody know what's up?

The lock down was another accidental one.

10:29,
He said that part of the information was incorrect. Get over yourself and drop it.