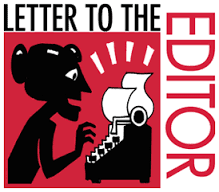 The following is the original text of the letter to the editor written by Ryan Jackson, Joplin, which appeared on the opinion page of the Sunday Joplin Globe in a somewhat weakened form, which I noted in a post earlier today.

While some may find this odd, I hope all will take a moment to consider this. As a Joplin voter, I was very excited to see this April we were going to have a contested school board election. When the state appointment came for former police chief Lane Roberts, while I was very glad to hear that happened for him, I was very disheartened to think he would not have the opportunity to serve our schools as an elected official. I thought it would be exciting to see him and Jeff Koch both be elected to the Joplin school board. Our school board certainly needs some new blood to revitalize things and get the focus back on education.

Ever since our current superintendent has came to run our school district, the schools' academic scores have continually fell year after year. Where our school district was once accredited with distinction, and was one of the most well thought of districts in the entire state; the current administration has not kept up that level of academic excellence and has used many excuses to blame it on something else. And yes while the tornado did present certain challenges to our schools, this trend start in the years prior to the tornado. By the time the temporary buildings were up and running we had better technology and more resources for our students than we had in years; yet academics continued to decline. Once building projects began we took out the largest bond issue our school district has ever seen and probably the largest we ever will. Yet we did not get the facilities we were promised, we ran over budget, and cut a lot of corners when it came to quality just to make sure we had the permanent facilities ready for this academic year all be it behind schedule. Our district has borrowed large sums of money to fund some of the projects that we have fallen short with, yet we still don't have everything that the voters agreed upon when voting for the bond issue.

So what has our school board done to address these subjects? They've put their heads in the sand and continued to borrow more money for frivolous spending on things like new seats for the gymnasium and siding for a press box. This inattention of our board has made me say, I'm ready to see some new board members and that begins Tuesday by voting out Anne Sharp. Anne has sat on the board for 15 years and seen the success of our schools, and this subsequent decline over the last 6 years has happened on her watch and she's done nothing to correct it. Enough is enough, and I say we elect Jeff and Lane. Even if Lane Roberts declines the position, the board will have to vote in a replacement. The board would look very arrogant and foolish to appoint Anne to a vacancy if she lost a reelection as the seated board president. I would encourage Joplin voters to stand up for our students and vote out the individuals who are not being good stewards of our school's budget nor pursuing the academic excellence that our kids need to prepare them for their futures. Let's stand up for our students and begin to put an end to this lack of oversight.

Regards,
Ryan Jackson
Posted by Randy at 9:34 AM

Someone needs to just ask the questions..


1. Yes the tornado was devastating, but Dr. Huff didn’t do anything any other Superintendent who was in that chair wouldn’t have done. Look at all the businesses, utilities, churches and organization that were wiped out. They rebuilt and got on with their businesses. But they did it without fanfare and didn’t travel all over the country to tell people how “they saved Joplin Schools”. The rebuilding of Joplin Schools is about the community, not the Superintendent.
2. The question that not one has asked yet is..What was the total construction bid vs. the total construction cost? When the bond issue was recommended they had a total amount needed for rebuilding the schools, in addition to what the insurance would provide. It’s a simple question, How much was everything supposed to cost and how much DID everything cost?
3. Prior to Dr. Huffs arrival the school district had been accredited with distinction for either 2 or 3 years in a row. Another simple question..what happened? Did the criteria for evaluating change? Was it our test scores? What changes if any have been made? Dr. Simpson was focused on teacher retention and making sure we were academically strong. A report from the MO Department of education for 2013 show the difference in leadership as far as academics are concerned
2013
Joplin Schools Subject Percent Proficient
English 52
Math 46.9
Science 56.9
Social Studies 53.3
Lindbergh Schools
(Dr. Simpson)
English 78.9
Math 83.6
Science 83.7
Social Studies 73.6
Another simple question…what happened?
4. The audit is what it is. If you have 4 rankings and you are the second from the worst ranking then you didn’t fare well.
5. What is the number of teachers who have left the district, whether that be retirement, resignation or termination . And what was the total number in terms of years of experience?

1. There was a tornado.
2. Be positive.
3. You do not unserstand the numbers.
4. Dr. Huff started the school on time..mostly.
5. Did I mention the tornado.
6. Stop attacking the Huff wife and children.

Yeah... everything is awesome!