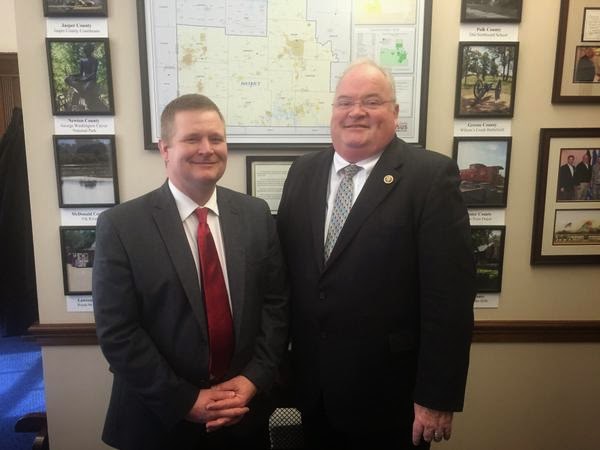 When I landed my first teaching job in the Diamond R-4 School District in the summer of 1999, I came across a sale that Missouri Southern State University students were having at Northpark Mall.

Among the items, to my surprise, were about a dozen books designed to help people teach writing. Since I had been hired to teach creative language arts (mostly writing), I bought the books for a bargain price of $130.

This came at a time when I had been unemployed for nearly three months and was entering a job that would pay me $21,450 a year.It was something that would help me with my work and it was worth the investment.

I would never have thought of trying to get the taxpayers to foot the bill for it, and most likely if I had tried, I would have been turned down.

Apparently, I did not understand how the system works.

When the Joplin R-8 Board of Education meets Tuesday night, one of the bills it will be asked to approve is an expenditure of $24.54 for the book Grounded: How Leaders Stay Rooted in an Uncertain World by Bob Rosen. The documentation reads, "Book for Dr. Huff."

The book is described on its Amazon page:

A provocative, personal approach to leadership based on in-depth research with hundreds of executives around the world

Confronted by disruptive change and economic turbulence, many of today's leaders find themselves ill-equipped to manage the hazards they now face. They must contend with chronic uncertainty, cynical employees, and personal burnout. Most are poorly served by the prevailing paradigm that obsessively focuses on what we do to produce short-term results while sabotaging who we are as healthy human beings. Few have seen alternatives, until now.

Grounded proposes a new approach that's designed for actual humans who must grapple with these forces. This new paradigm speaks to our better selves. Based on the author's Healthy Leader model, it focuses on the six personal dimensions that fuel—and refuel—the world's top leaders: physical, emotional, intellectual, social, vocational, and spiritual health.

The book argues that leaders at every level can be more self-aware, develop their untapped potential, and drive significantly better results—for themselves, their teams, and their organizations.
Shows readers how to build a personal leadership model that works with their values, goals and capabilities
Features fresh stories from leaders in a variety of organizations including the New York Fire Department, PricewaterhouseCoopers, The Lego Group, and Medstar Health
Gives leaders practical tools to face their toughest challenges with greater skill, confidence, and impact

By developing themselves and mastering the six dimensions, readers can gain the stamina and strength to not only weather tough times but to achieve much, much more.

With job prospects uncertain, it is not surprising that Huff, pulling down $177,000 a year, not counting his speeches, decided to pass along the $24.54 cost of his book to the taxpayers.

As usual, though, C. J. Huff did not bother to look for the lowest price. The Amazon page shows he could have received a "like-new" copy of the book for four cents, plus $3.99 postage.

Those of us who do not have millions of dollars in taxpayer money to play with takes these choices seriously.

Still, isn't it refreshing to know that after seven years as the leader of the Joplin R-8 School District, C. J. Huff is trying to learn how to be a leader?
Posted by Randy at 9:57 AM

Really, Mr. Huff? You want us to buy you a book? Why not ask for an iPad so that you can be like our students? Maybe deep down you know that books are better than computers.

Maybe if this so called Christian would read, as in understand, The Good Book, he wouldn't need to stick us for a "good book."

Just one more example of how his lord high judge has labled the citizens of this town as having an entitlement mindset, while demonstrating that no one is as entitled as he is.

By the way, while you are deciding who should get books, maybe you can use some of our F'n tax money to buy them for.....wait for it....

Books are wasted on this stupid moron.

Hopefully Humpty Dumpty shown in the photo with him isn't that leadership midel.

This reminds of Speck's behaviour at MSSU--big salary, housing allowance, car allowance but he'd submit the $3 receipt for his car wash for reimbursement. Maybe JHS's time of woe will have a similar resolution?!?

and this is my other brother Darryl

Now, I know I ain't none too bright, but even folks like me can see right through this here plan. Not even Cap'n Huff and Hop a Long Landis can pull this here little trick off. Even this ol' farmer can see that the plan is to convince us poor folk that we have been misled, by Gawd, misled by none other than this here Turner feller and his gang of malcontents. But it ain't a gonna do them even one whit of good, by golly, becuz BS is the specialty of folks like me. We can smell it a mile away. This book is another waste of the fine tax dollars that hard working folks such as myself have worked laboriously hard fer. Shame on you, Huff, shame on you.

I'm of the opinion that this book falls under the category of "too little, too late."

Is it true that CJ has moved this Tuesday's meeting to 4:00 because he heard that the Columbia parents were going to pack the meeting? We still will, Dr. Huff. But you have made your public meeting a major inconvenience for the very people who make your overinflated salary possible. I think you will find that counterproductive.

Who's going to read it to him? The way R8 goes I didn't think we was looking too educated.

It seems to me that a man who makes over 180 grand a year off the public could, conceivably, pay for his own book. You have to expect this from a man so cheap he doesn't even tip 5% to wait staff. In fact, he prefers fast food where no tip is required, unless, of course, the district is buying. Cheap bastard.

wow...a leader that continues to learn! A LEADER willing to stand up to all you turds that hate on everything related to education. And me, the TROLL that sees you all for what you are. Seriously? Hating on an educator for reading and learning? Haters are going to HATE aren't they? I imagine my comments will be excluded since Mr. Turner's page appears to be for HATERS only. Great Job Dr. Huff! keep on learning, keep on growing and all you hateful people - step up and learn something. Glad to know your district leader takes the time to read and if you checked, I'd bet TEACHERS get MANY MANY books and resources for FREE! Along with technology, training and everything they need to teach and LEARN...yah see, education isn't an industry, it's EDUCATION and it COSTS MONEY. Dr. Huff isn't CHEAP, he's in an a learning organization that REQUIRES he keep on learning; I'd be concerned if he NEVER read and NEVER sought out new learning. Pay the tab JOPLIN - or just shut down your school and live in caves. DESPICABLE HICKS! So short-sighted. Bet every one of you spent at least 100 bucks on your last tattoo of something ignorant on your body. Shame on you all for how you run down the school serving your community and all the leaders trying to help your families. SHAMEFUL, IMMATURE and IGNORANT. BE encouraged Dr. Huff! People with a brain know your heart...fight the good fight.

We're hating on him because he has cost the tax payers millions of dollars in wasteful spending. You know, that green stuff that we buy our tattoos with.

Lmao
Make certain your grammar is perfect before you start spewing vile BS.

No, the teachers do not get books for free, from him anyway. He sells their educational materials and they buy more with their own funds. Check your facts.

I would personally buy him a copy of: