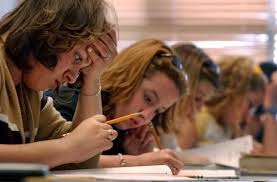 One of the only saving graces of the C. J. Huff Administration's long, disastrous dalliance with Acuity is that its regimen of practice tests did not extend to the lowest grades.

If Huff and his top-level administrative team have their way, kindergarteners, first graders, and second graders will soon have to go through just as many practice standardized tests as the other students in the school district.

During a special 3:30 p.m. meeting of the R-8 Board of Education Tuesday in the Irving Elementary School cafeteria, the board will decide whether to spend nearly $300,000 on an assessment program, which will include at least four practice standardized tests per year.

The cost for the first year is just under $100,000, according to the documentation.

And the wording makes it clear that the district will also be using results on these practice tests to evaluate teachers.

Teachers were pulled out of classes to create curriculum that was based on the content of these practice tests.

Now it is starting all over again with this testing regimen, which is based on preparing students for the new Common Core tests.

According to the request, which is signed off on by Curriculum Director Sarah Stevens, Executive Director of Secondary Instruction Jason Cravens, and Superintendent C. J. Huff, (and which is also being pushed by Executive Director of Elementary Instruction Jennifer Doshier) the NWEA Measure of Academic Progress Interim Assessment will do the following: (Warning- Jargon Straight Ahead)

-NWEA MAP Interim Assessments provide essential information about a student's progress of learning and growth trajectory against essential standards and skills up to four times a year.

-Enables administration to understand the progress of every school, classroom, and student in the district.

-Sets up the experience to be about goal setting for self-regulated learning, parent involvement, and differentiated learning

The cost for this testing program is broken down as follows:

-The science program is done separately and will cost $3,000 the first year, with no set amount for succeeding years, meaning it could cost the district even more.

Bids were taken for the testing program, but the Northwest Evaluation Assocation (NWEA) package was chosen because it was the only one that offers testing for grades K-2.

It should be noted that the Huff Administration is asking the board (and the taxpayers) to spend nearly $300,000 during a time in which the district is already reeling financially- and it is asking that money be spent for the same type of program that taxpayers spent more than half a million dollars on, and which resulted in test scores dropping every year.
Posted by Randy at 9:39 AM

NO MORE TESTS!!!
Add the fact that K-2 testing is even less reliable than it is for upper grades. Testing young children is NOT age/developmentally appropriate.
One more REALLY BAD decision/recommendation from Stevens and Doshier.

The claim that they can see every classroom is incorrect They can only see results in TESTED classrooms, which hardly makes the burden of educating students equitable. Are the teachers under this constant scrutiny going to have some kind of bonus? Or will you continue to pay them the same rate as the elective class teacher? That doesn't seem like a fair deal. Will you be doing further research before you make your evaluation to see how many of the students those tracked teachers have that worked all night, are strung out on drugs, worried about their personal issues, or who just don't show up that often or care? Your data will be a very small snapshot of what is happening. This is unjust, and if it passes, I will resign.

How many teachers could you hire with that money or how many books could you purchase? As a parent, that is far more important to me than nonstop assessment. This is what we elected the new board to stop. And they should. No bid? Testing K-2? Where does it end?

Why does the district need all of this? What were they doing when they were accredited with distinction? Go back and do that. It worked. We would save millions of dollars on unnecessary programs and staff members. Like Sarah, for instance. Or her newly hired assistant. Millions. Give it to the teachers and invest it in materials and you will see scores rise.

I was thinking about the fact that we are coming up on the four year anniversary of the tornado, and at least two of the elementary schools do not yet have safe rooms. Some of those buildings are in deplorable condition. Perhaps before we start testing even younger students, we should make sure that they are safe first. That only makes sense, so I am sure Stevens, et al, would never think of it. We will hope the new Board members do. The old ones never will. We need common sense here now, people, not more of the same.


???: If your pig is not gaining weight, rather than feeding (teaching), you weigh (test) him.

More online assessments. More testing all the time. How about some instruction?

I don't care if my kids can take these stupid tests! They aren't valid and they don't help them be ready for the real world--where we don't practice taking tests all the time.

Wanted...Professional Test Taker.
Must be able to take a variety of tests under a variety of conditions. Producers of goods and or services need not apply.

Joplin schools. What every dumb idea comes to live.

There is no evidence anywhere to show that testing K-2 is valid or statistically significant. It is a waste of money and time and puts undue pressure on children who should be learning to socialize, adjust to a new environment, to learn the alphabet and numbers, and to read and compute in a nonthreatening environment. Are we really going to subject five-year-olds to computerized testing? The American Pediatric Association recommends that young children have no more than 30 minutes to an hour of screen time in a total day. Are we going to ignore that and put our little ones in front of computers so they can learn keyboarding? This is poorly thought out. If the new Board supports this, we will know that all hope is lost.

Perhaps the new members of the Board don't realize how many different ways their teachers are already held accountable already:
Principals all must do 10 walk-through observations weekly. They concentrate on tested classes.
The new teacher evaluation system requires endless documentation and visits and observations.
There is now a requirement for an ePortfolio so teachers can justify what they do.
They must show what they have done to promote literacy every week.
They must have all assignments and curriculum on Canvas.
They must have all learning intentions and success criteria in view for the lessons of the day. This is really fun for those of us who have multiple classes or grades.

This is just off the top of my head. Evaluations are fine. Observations are fine. But in a district where teachers know that the shoe is always about to drop, this adds to the perpetual stress. It also takes massive amounts of time that could be spent making connections with students, talking to parents, making lessons, or grading papers. There is little time left for teaching. This assessment system adds one more layer of evaluation with the people quantifying the data completely unaware of what might have been going on in the classroom at any given test time. It is not fair at all. It is overkill. If the Board adopts this, teachers will know right off the bat that they are no better off than they were before. We will hope that is not the message we get.

Infinite Campus can do much more with data than the district has ever explored, and we already have that program in place. Maybe the new board should look that over and get a representative from IC to explain what their program can do.

So, I foresee a massive hiring of data analysts overseen by a Data Analysis Director.

Do not believe the new board will allow this overspending to happen.

Have mercy on the little ones. They still have hope for their lives. Don't ruin that with useless testing.

Any educator knows that spending money does not produce results. Achievement is produced through quality, experienced educators teaching with the use of sound educational practices. Check Huff has run off all the quality teachers and no sound practices have been used since he came and had no focus on academics. Where is the 300,000 coming from? (Borrow again). The fact is he doesn't know how to improve student achievement it is evident.