Judge: Bajjali has to repay $1.5 million to cheated investors; Wallace is bankrupt 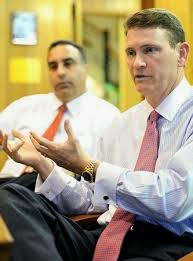 A federal judge says that investors cheated by David Wallace and Costa Bajjali have to be repaid $1.5 million, but Wallace will not have to pay a cent of it.

Because David Wallace filed for personal bankruptcy, the judge on Wednesday ordered Bajjali to repay the $1.5 million.

The money is the settlement reached with the former Joplin master developers after the Securities and Exchange Commission (SEC) fined both men $60,000 for their roles in the BizRadio media scheme.

While both men paid their fines, just a few days before the City of Joplin hired Wallace-Bajjali Development Partners, not one cent was ever repaid to the investors.

In bankruptcy documents, Wallace claims he has $11.5 million in debt, including $4.5 million of the $5 million he borowed from Prime, Inc., a Springfield firm to jumpstart Wallace-Bajjali's work in Joplin.

While Bajjali has filed for bankruptcy on several of the companies connected to Wallace-Bajjali, he has not filed for personal bankruptcy.