Three editors who taught me a lot 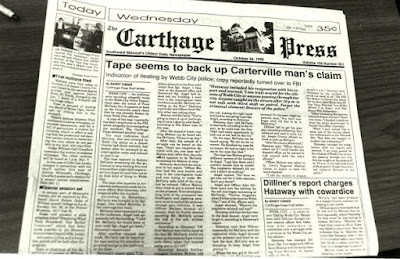 During my 22 years in newspapers, there were only five years when I was a reporter answering to an editor. I was fortunate enough during that time to work for three editors who taught me a lot about news

My first newspaper job was in 1977 at the Newton County News. I was both editor and advertising salesman. As I have noted before, I was not only the youngest newspaper editor in the state, but I was the worst and I couldn't sell advertising either.

Surprisingly in May 1978 I got another chance when I was hired as sports editor of the Lamar Democrat, which was a daily newspaper at the time. My editor was Lou Nell Clark, who probably had more of an impact on my journalism career than anyone.

I learned from Lou Nell that if you wanted to know what was going on in government, you don't just talk with mayors, city managers and school superintendents. You have to get to know the secretaries, janitors, teachers and all of the workers who punch the time clocks.

She also taught me that you can always find out what happened in a closed session by checking with the people at the Blue Top Restaurant and the Daylight Donut Shop, where board members and council members had a tendency to talk about things that shouldn't be talking about.

Unfortunately, I only worked for Lou Nell for eight months before my position was eliminated by our new owners. The same company hired me a month later to become the final editor of the Lockwood Luminary-Golden CIty Herald in 1979.

My second editor was Emery Styron, who gave me a chance to return to the Newton County News on a part-time basis in the fall of 1980. From Emery, I learned more about community journalism and the importance of caution and pinning everything down before you run a story. I did not get to work for Emery long. He left the newspaper for another opportunity and I had my second chance. I was much better as an editor and reporter, but I still couldn't sell advertising, so I only lasted there until February of '82.

After about 7 1/2 years as the editor of the Lamar Democrat, no a weekly and then a twice-weekly during my time as managing editor there, i called up the third and final editor that was unfortunate enough to be stuck with me as a reporter.

Sometime in the late '80s, Neil Campbell, the managing editor of the Carthage Press called me and asked if I would be interested in talking with him about a job. I really was not looking to change jobs, but I went to Carthage and talked with him. I did not take the job, but in March 1990, I was ready to try my hand at being just a reporter on a daily newspaper.

At the time, I did not realize how much nerve it took to call Neil and ask him if he were still interested in having me at the Press, especially since it had been more than two years since we talked.

Fortunately for me, Neil said he was and I ended up working at the Press. Neil taught me a lot about dealing with reporters who thought they knew everything (and there were times when I fell into that category) and how to manage a full staff, something I had never done. Even though he gave me some assignments, he had the confidence in me to allow me to dig up my own stories and set my own schedule, something for which I am eternally grateful.. The three and a half years I worked for Neil were the most enjoyable I ever had as a reporter and I am a person who has always loved my work.

He backed my efforts at investigative reporting, including an 18-month probe into problems in the Webb City Police Department, with a couple of those articles shown in the photo accompanying this post.

I watched and learned from Neil with the thought that at some point I might like to try my hand at being the editor of a daily newspaper. I never expected that daily newspaper to be the Press.

Neil had health problems and he and Publisher Jim Farley told me in November 1993 that Neil was going to be stepping down and they wanted me to replace him as managing editor.

Those were mighty big shoes to fill.

The reason I write this post is because today is Neil Campbell's birthday.

Happy Birthday, Neil, and thanks for everything!

To this date, Silver Lining in a Funnel Cloud: Greed, Corruption and the Joplin Tornado remains the only book to offer investigative reporting into the way Joplin city and school government responded to the May 22, 2011, Joplin Tornado. The book can be purchased at Amazon. com through the links below and is available locally at Always Buying Books, Changing Hands Book Shop and the Book Guy in Joplin and Pat's Books in Carthage.

I most definitely see the influence from Lou Nell Clark and that’s not a compliment, though will likely be perceived as one.

Thank you for continuing your reporting career Randy.
Although you and I have different political views, I always enjoy your articles.
We can agree to disagree and yet still communicate in a civil manner.
Seems like there is a shortage of that type of behavior in our country.
Thank you for providing a forum to bring together people of opposing views and allowing us an outlet to voice our opinions.