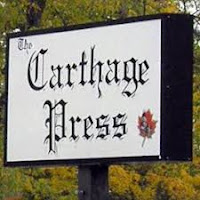 The Carthage Press, a staple of the community since the 1800s, will publish its last edition Wednesday.

GateHouse Media officials pulled the plug on the newspaper today, announcing the decision during a meeting that had been scheduled to talk over requests for the voluntary buyouts the company was offering.

Apparently, the buyout requests were accepted. Unfortunately, it appears Editor John Hacker and the people working at the Press will not have the opportunity to at least say a proper goodbye to the community. There will be no retrospective of the history of the Carthage Press, no tributes to people like Neil Campbell, Marvin VanGilder, Jack Harshaw, Corky Simpson and all of the others whose words kept the people coming back to their hometown newspaper for years.

Reportedly, the Neosho Daily News escaped the ax, though GateHouse officials appear bound and determine to bleed that newspaper dry.

I will have more to write about this.

For those who were offended by the headline, I apologize, but that newspaper and my time there mean a lot to me.
Posted by Randy at 8:49 PM

Wow... I felt the same way when Carl Junction lost the STANDARD. During my years in the Military, I always had it sent to me, what wonderful memories I had.
Printed Media is in real trouble and I do not know what will fix it.

You are right to be angered, Randy. On the bright side, with the worst finally happening, there may be an opportunity for concerned local citizens to revive the Press as it should be run. I will put money where my mouth is.

Steve,
That is very Noble of you( almost as much do as Tom Sawyer to Becky Thatcher

Perhaps a new paper could be created!

Thank you, Harvey. This can be done, though investors would have to do it as a labor of love, and if it makes a profit, that's gravy. We have to be emotionally and financially prepared to lose everything we put in. We can't just jump in out of knee-jerk emotion (I too have a background with the Press; we used to print MSSC's "Chart" there in the 1970s). It will take a study of the business side. I know people who ran a paper who might help.

It's been on life support for several years now. If the Carthage community wanted it to stay then the advertisers would have supported it.

A lot of truth there anonymous...it takes advertiser support, and it also takes reader support. Were they lacking? Possibly, but more likely, the fact the business decisions were being made long distance and those decisions did not include enough monies for qualified sales staff and the ongoing training...nor did it include enough monies to hire enough journalists to adequately cover the news of the community. Add to the mix, more and more younger readers just don't want to read something not online. The quest to cover a local community, with one all encompassing product, in this day and age, is a monumental challenge...a challenge which will require many voices with new ideas, not to mention tremendous capital investment. It's going to be interesting.

If someone does step up to the plate and do a reset on the Carthage Press, print the news. Many people in Carthage have no access to the 24-hour cable news cycle; many people have no internet access. PRINT THE NEWS. Getting local businesses to pay for advertising could be a problem though you have to show them it pays.