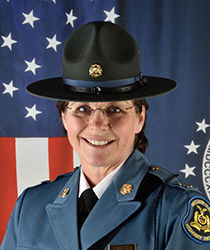 Charles A. (Drew) Juden, current Director of Department of Public Safety, will depart the agency effective August 31, 2018. Governor Mike Parson has asked Colonel Sandra K. Karsten to serve as Acting-Director of Missouri’s Department of Public Safety during the transition. Colonel Karsten will also continue her role as superintendent of the Missouri State Highway Patrol.

“Drew is a well accomplished public servant. We appreciate his time and service to the State of Missouri and wish him well in the future,” said Governor Parson. “Colonel Karsten has a long track record of being a top-notch professional and an exemplary public servant. We are confident in her leadership during this transition.”

“Governor Parson asked if I would be willing to assist during the Department’s transition, and I am more than happy to help. Ensuring the public’s safety has been a top priority in my 33-year career in law enforcement, and it always will be,” said Colonel Karsten.

The Department of Public Safety plays a critical role in our state, and the Governor will be working to appoint a new director in the near future.
Posted by Randy at 9:59 AM