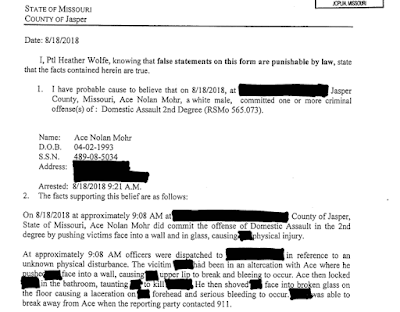 Less than six months after being placed on probation for multiple felonies, Ace Mohr is back in the Jasper County Jail on a $30,000 cash only bond after being arrested by the Carthage Police Department on a felony domestic assault charge.

The probable cause statement says the assault took place Saturday morning. The victim's name, sex and the location were redacted.

"Ace then locked (the victim) in the bathroom, taunting (the victim) to kill (redacted). He then shoved (the victim's) face into broken glass on the floor causing a laceration on the forehead and serious bleeding to occur."

The victim was able to break away from Mohr, according to the statement and 911 was contacted.

Mohr pleaded not guilty during a video arraignment today in Jasper County Circuit Court. The next hearing in the case is scheduled for 9 a.m. September 5 before Judge Joseph Hensley.

On March 5, Judge David Mouton sentenced Mohr to five years in prison, then suspended the sentence and placed him on probation for five years on charges of receiving stolen property and possession of heroin with intent to distribute. As part of his plea agreement, multiple felony charges, including possession of methamphetamine and cocaine, were dropped.

If this domestic assault is deemed to be a probation violation, it will be the second that has been filed against Mohr in the short time since his sentencing.

Jasper County Circuit Court records show a probation violation report was filed July 12, though no indication was given of what caused the report and it was recommended that Mohr's probation be continued.

What ever happened to the "three strikes" and you are in prison for life?

What is going on here? Why is this dangerous felon still walking around free???

You might want to cover this idiots Social security number. Not that i think anyone would be dumb enough to use it but you never know!

oh Ace your never going to learn. You and Kayla have a new baby girl and your still acting stupid. I'm sure Oakley and Kayla will have fun visiting you behind glass if she don't run off. SMH

What a scumbag. Ge musg be an informant. And quite the junkie. LOCK HIS TAIL UP.

Let’s see how long it takes for him to get out of jail?
Not long I bet
Who can he snitch on......
He should have been in prison 6 yrs ago
He’s dangerous
He knows how to get out charges
He almost killed this person, I pray to God the children where no where around

He has supplied more drugs in this town than anyone knows
Gave my child their first high...... meth
He is needs to be held responsible for once...
Will he?
Probably NOT

This kind of thing happens in our courts on a daily basis. There’s not room in prisons and I don’t think new ones are being built. On top of that, there’s no rehabilitation to speak of so when they get out the cycle continues. I’m all for building the wall and reform of immigration laws, but most of the crimes around here are committed by natural born citizens. A significant amount of that is by garden variety white trash.

Time to start holding Judges accountable to the scrum bags that are being allowed to plead down and continue to lead lives of crime. There should be no tolerance for a person of his character on the streets.