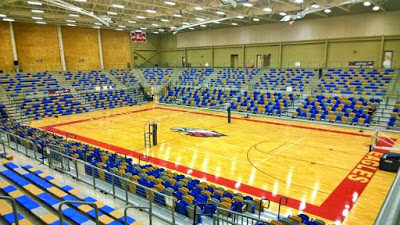 The $100,000 wrong-color Joplin High School gymnasium seats and bleachers that were one of the lowlights of the last months of the C. J. Huff Administration have not gone anywhere.

The Joplin R-8 Board of Education gave administration the O. K. to put the bleachers up for bid in May.

The only problem is nobody wanted them.

When the bleachers first arrived at JHS, in the rush to live up to former Superintendent C. J. Huff's promise to have the new building open by the start of the 2014-2015 school year somehow ordered seats that were not the school colors.


The matter was addressed at the December 2014 board meeting when Huff buried an item on the consent agenda that recommended spending approximately $100,000 to replace the bleachers and seats with ones that were the right color.

That move was addressed in the Turner Report:

When the C. J. Huff Administration selected the colors, for some reason, they neglected to use the Joplin school colors.

That problem will be handled following Tuesday night's Joplin R-8 Board of Education, but at a cost of nearly $100,000 in taxpayer money.

You also will not hear the matter discussed during the televised portion of the board meeting or during the work session. The item, referred to in the board agenda as "Change Management #254- Bid Package #120- Gym Seating," is part of the board's consent agenda, meaning the board will vote on it along with several other items without discussion.

Carroll Seating will do the work at a cost of $95,206.17, according to board documents.

The reason the changes need to be made, according to the document is "colors of gym seats provided were deemed unacceptable."

The document does not indicate by whom it was deemed unacceptable nor how the C. J. Huff Administration allowed their citadel of 21st Century education to feature a Jumbotron-type device, but not have the school colors.

The money for the change in seating colors will be taken from the 2014-2015 Capital Outlay Budget, according to the document, which was signed off on by Building Program Director Mike Johnson and Superintendent C. J. Huff.

After the attempt to hide the bleacher expenditures in the consent agenda was exposed in the Turner Report, Huff explained the situation to the board at its December 16, 2014 meeting:

Everybody makes mistakes, he added.

Then he told the Joplin R-8 Board of Education that the mistake in not getting the right colors for seats in the new Joplin High School gymnasium was made by the design team.

The mistake will cost the taxpayers more than $95,000, the cost for replacing the wrong-colored seats. The board approved that cost by a 6-1 vote with Debbie Fort casting the dissenting vote.

That vote followed a convoluted explanation by Huff over how he would fix it so it did not end up costing the district anywhere near that much.

"I'll try to walk you through this," Huff said, as if he were talking to a group of kindergarten students who did not understand high finance as well as he does.

Huff said some of the seats would be placed in the high school's third gymnasium and others would go to elementary school safe rooms. And even better, he said, other school districts, including Carthage and one in Arkansas, were clamoring to buy the seats, which would further cut the costs.

How much can be made that way is uncertain, Huff said. "Until the check's in the bank, it's hard to say."

Fort asked several questions about the expenditure, asking Chief Financial Officer Paul Barr about where the money would come from. When Barr said it would come from the capital outlay fund, Fort asked if this was part of the $45 million the district borrowed a couple of months ago.

Barr said it was.

At the May meeting, administrators recommended the seats be put up for auction on a government website, saying, "The seats serve no purpose to Joplin Schools." 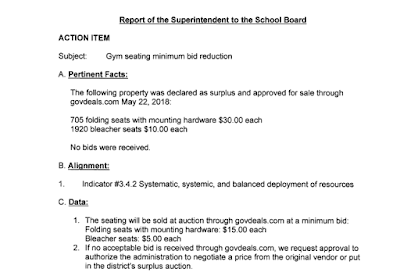 Minimum bids were set at $30 each for folding seats with mounting hardware and $10 each for bleacher seats.

Since no bids were received, administrators are asking the board to allow them to resubmit the items for bid at lower prices- $15 for the folding seats and $5 for the bleacher seats.

If they do not receive any bids this time, the seats will either negotiate a price with the original vendor or put the seats in the district's surplus equipment auction.

(Disclaimer: I am involved in a legal action against the Joplin R-8 School District and C. J. Huff.)

Silver Lining in a Funnel Cloud: Greed, Corruption and the Joplin Tornado is available locally at The Book Guy, Changing Hands Book Shoppe and Always Buying Books in Joplin and Pat's Books in Carthage or can be purchased online in paperback and e-book formats from Amazon at the links below.

What a waste of money

As I have said publicly before... this completes my childrens' educations how? Got an idea... use the money to send two deserving kids to college instead of wasting time having meetings to have a meeting to waste even more money to have a plan to waste more money on aesthetics not the actual job of teaching children. Teachers need school supplies throughout the district and we are still moaning about colors that have mattered not in the least since this farce began.

So don't throw lawn darts up thinking they won't come down.

The design team made the mistake? These things don't happen in a vacuum. There have to be approvals from higher-ups -- a lot of higher-ups in such a mammoth project. Had things gone right, everyone would be clamoring for his share of the credit. "I was hands-on every step of the way." Failure is an orphan, though. It angers me that nobody had the cojones to say, "It was my fault." Somebody (or bodies) screwed up to the tune of about $100,000 of taxpayers' money.

Give them to the new connect to our culture building