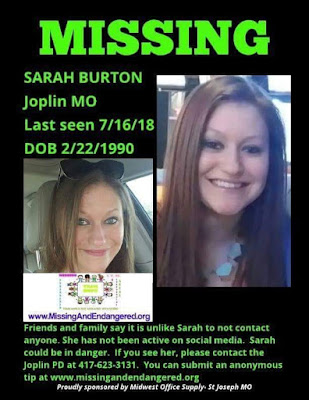 Almost six weeks have passed and the search continues to Sarah Burton, 27.

The Joplin Police Department recently issued a second request to be contacted by anyone who might have information about her whereabouts.

A "Bring Sarah Burton Back Home" Facebook page has been launched and the people behind that effort are preparing flyers to circulate throughout the city.

Burton was last seen July 16 and has had no trace of social media activity since that time.

In an exclusive interview tonight on KSN's 10 p.m. news, Burton's father, Ron Burton and her sister, Amanda Midyett, told their story and asked the community for help.

From the KSN report:

"It's just been devastating because it's like she almost fell off the face of the earth. We have no news, no information, and no leads at all," says Sarah's sister, Amanda Midyett.