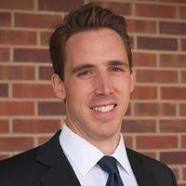 (From the Josh Hawley campaign)

Of all the problems in Washington, one could argue that blind partisanship ranks among the worst. A Senator’s duty is to the people of their state, and everything else should come second.

Why then, is Claire McCaskill still refusing to put Missourians first and voice her support for Judge Kavanaugh? Why did she refuse to vote for our tax cuts?

Because she listens to what Chuck Schumer tells her to do.

I want to fight for you, not a party. I vow to be Missouri’s voice in Washington, something Claire McCaskill hasn’t been in a long time.

Look who is talking about puppets. You are sucking up to Trump in a way that makes most very ill at their stomach. If you were for Missourians you would be pushing for better health care, child care, elder care and protect the farmers from stupid trade wars versus having to spend more money bailing them out due to trade tariffs. Not even into making sure wages are given a boost and worker protection when on the job injuries occur. You leave a nasty slime trail from your wealthy donors right up to your mansion aspirations in the sky as did your governor you so placed in an ivory tower.

Humphreys does more for people than Chuck"TV hog" Schumer....

Well, I think we should remember this and be sure to monitor how he blindly follows the party if he wins.

Is this Howdy Doody Hawley guy another Lackey Laxalt in the making?