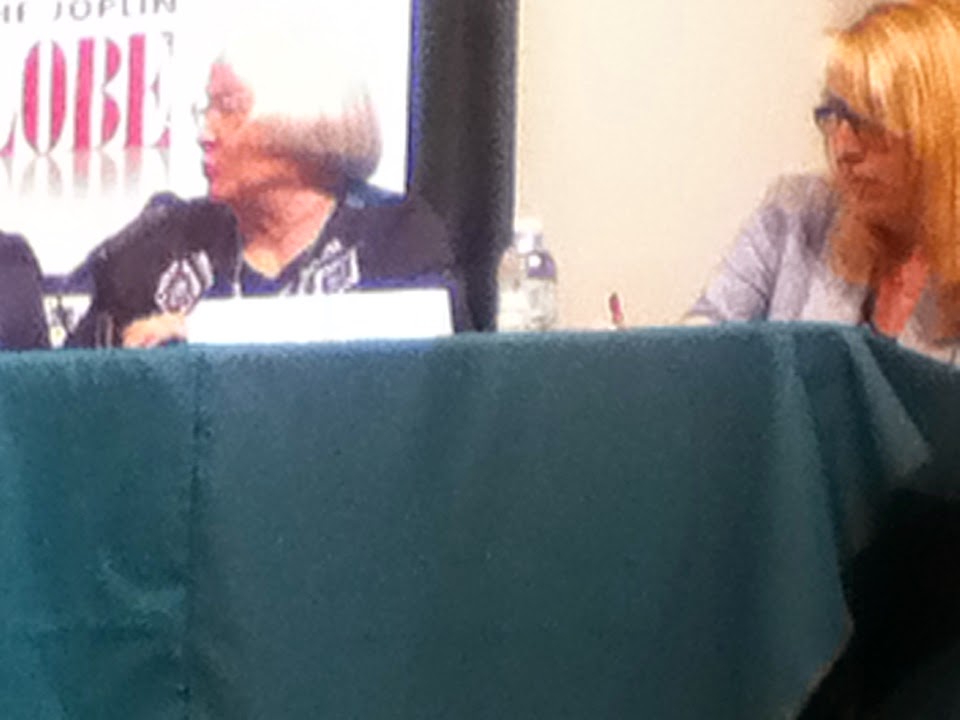 For all of those who thought Superintendent C. J. Huff and the R-8 Board of Education were responsible for massive overspending on the building projects, board candidate Nancy Good says you are not aiming your sights high enough.

"God made the plan when he destroyed the buildings and we rebuilt," she said during the candidate forum held tonight in the Curley Auditorium at Missouri Southern State University.

Good used the "we" references numerous times during her answers about questions pertaining to board actions, though she has never served on the board.

The shout out to God was the only one any of the candidates made during the hour-long forum.

Almost from the beginning, the forum divided into two camps, with Jeff Koch and Jennifer Martucci criticizing overspending and lack of emphasis on academics, while the only incumbent in the election, Board President Anne Sharp, Good, and Melinda Campbell favored continuing to steer the R-8 ship on its current path.

Good's answer was to a question former Joplin Globe editor Dave Woods asked on whether candidates thought the district had overspent and overbuilt,

Campbell, who along with Good and Martucci are running for a one-year unexpired term, said, "I don't think we've overbuilt.'

Sharp noted that the entire building project was a community effort, beginning with teams that took 25 road trips to look at other schools. "Once this year is over, our community will be pleased."

Koch liked the added safety factors in the buildings, but added, "Yes, we overspent and it caused us to lose focus on the main goal," which Koch said was educating the children.

Martucci put it bluntly. "We've had to borrow money. That indicates we've overspent and overbuilt." She said the board learns to need to distinguish between "what we want and what we need."

Good was the only one in total opposition. "I do not believe in collective bargaining," she said. "It can be a danger." She added that it would bring in unsavory elements. "We're fine where we are."

Sharp echoed the quote she gave to a local television station recently saying, "We meet and confer. Everybody is at the table." Of course, the meet and confer sessions are informal and the teachers have absolutely no leverage.

Koch said he had changed his opinion on collective bargaining over the past year noting that it was important for teachers to have a voice "without fear of retribution."

Another Hartwell question dealt with the "direct learning" idea that is being pushed in the R-8 District, where students take charge of their own education without the kind of teacher-initiated lessons that have been par for the course in the past.

The question was only directed to two candidates. Campbell did not really answer the question, while Good was firmly in favor of direct learning. "I really believe in the idea of self-regulated learning. It is a great tool in teaching today.

Hadsall asked the candidates what they liked most and least about the new buildings.

Good, Sharp, and Campbell liked everything about the buildings.

Good's favorite part was the learning stairs because they "give the kids the opportunity to network." She liked the brightness and modern style of the buildings. "I have not seen any negatives," she added.

Campbell said the facilities are "absolutely beautiful." Saying that seeing the high school, "makes you want to be there."

Martucci liked the space and the safe rooms and having Franklin Tech with the high school. Negatives, she said, included "changing out seats" in the high school gymnasium (referring to the $100,000 expenditure when the seats were the wrong color) and "astroturf on the practice fields."

Koch also cited the safe rooms, but was concerned about the amount of glass in the high school and East Middle School, noting the cost of cleaning and possible dangers to students.

This question was raised by the defiant way in which C. J. Huff and the Board responded to the state audit recommendation that the board beginning including decisions made in the closed sessions in its minutes.

Huff and the Board indicated they would put together a community panel to see if the community thought they should follow the law.

Sharp defended the status quo, but added, "If there is something that is supposed to be open, it should."

Good said, "It is important to follow the Sunshine Law," and she was in favor of being open with the public.

Martucci said it was not a matter of choice whether to follow it or not. "It's the law."

Campbell was also in favor of being open with the public.

Good and Martucci were asked about how to handle bullying.

Good said, "I don't have a good answer. I'm not aware of what's happening in the schools."

Martucci was aware and noted there have been cases in the high school of students bullying other students and teachers. "There need to be consequences."

If Nancy Good does not know what is happening in schools, she should not be on a schoolboard

Divine intervention in the board race.

All for the children.

Praise Jeebus and pass the bucks!

Good grief-Good doesn't have very good sense. Isn't aware of bully's; and God made the tornado so Joplin could get new buildings. How asinine.

Hey Ms. Good,
many of us died, and many more were injured.

Haha someone dinning for school board and her answer was, I don't know what goes on in the schools - really right more my children could the board better than it has.

How many family members did you lose, Ms Good? Would rather have them back or a shiny new building?