The story of Annie Sharp and Randy Turner's birthday card 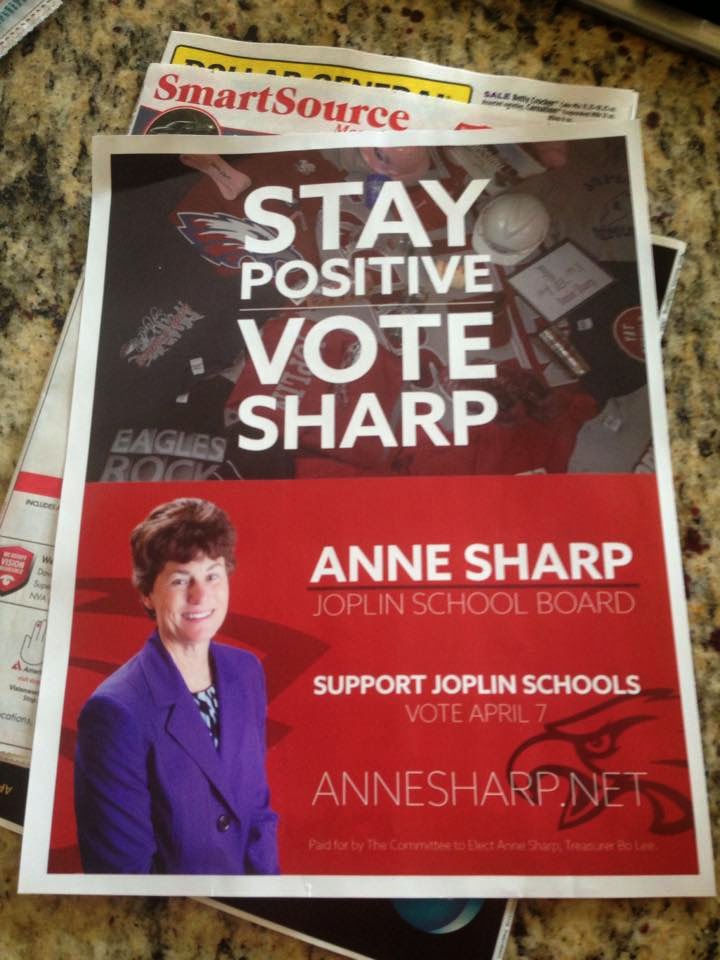 I really did not want to talk to her.

And for the life of me, I had no idea why Annie Sharp wanted to talk to me.

If you were Annie Sharp, would you want to talk to somebody who describes you accurately day after day?

But there she was, heading across the Corley Auditorium at Missouri Southern State University, a smile plastered across her face to the second row seat where I was sitting preparing to take notes on the Joplin R-8 Board of Education candidate forum.

"Mr. Turner, didn't you just have a birthday?" she asked.

"I don't have a birthday until next year," I said, but she quickly brushed that off and continued a conversation that was already one sentence longer than I would have preferred.

"I know you had a birthday, I used to send you a card on your birthday."

So that was what this was all about. I had written about her using her access as a board member to boost her re-election campaign.

And I still don't recall ever receiving any birthday cards from her, though it may well have happened.

Left unmentioned was the fact that I had written about her sending birthday cards and including her campaign literature, definitely crossing the ethical line.

As I sat there, I considered explaining that to her, but as I did, everything else she has done the past several months, every time she has crossed lines which she should never have crossed- using school facilities and a captive audience of teachers to make her campaign video, e-mailing teachers and asking for help with her campaign, asking for teachers' home addresses (and then apparently getting them through the teachers' records), and aiding and abetting one of the most morally bankrupt superintendents this area has ever seen.

It was an awful sight, seeing Annie Sharp's political life flashing before my eyes.

So I didn't say anything and after an awkward pause, she left, clearly irritated with me. For some reason, she thought I would really want to talk to her.

Those few sentences were enough, make that too much, for me.

As for my birthday. Annie Sharp was wrong- by more than three years. My last birthday was February 29, 2012. As I told her, I will be having a birthday next year.

For those of you who will jump to characterize this piece as spiteful and its author as a hate monger, you are correct. When taken out of context, this reads as an unwarranted and immature response to a caring human being reaching out to help a bitter old reporter see the bright positive light of life.

Imagine someone bigger and more powerful than you slaps you, spits in your face, and steals your last dollar. Then when others are looking on makes a show of caringly attempting to cheer you up and put a smile on your face while you bristle at her fake attempt to appear friendly. That is context.

Context is important and Mr. Turner may have made a mistake in assuming that the reader is aware of what happened to him. Talking to people in the community, I am continually amazed when I come across those who have just learned about the Turner Report. As someone who sat through the disgraceful hearing that ended his teaching career, it is important that people know what happened to fully understand this post. Anne Sharp sat silently as CJ Huff, Tina Smith and other administrators told lies about Turner that had nothing to do with the flimsy charges against him and everything to do with punishing him for daring to write a book that made fun of Huff. Two years later, she approaches him and wants to remind him that she used to send him birthday cards. Turner's point was that she seems to have no idea how many times she has made moral and ethical errors and she doesn't intend to make any changes. Considering what was done to Turner, he was far nicer to Anne Sharp than I would have been.

Perhaps her attempt to engage you was an expression of guilt/remorse or seeking forgiveness?

>>Perhaps her attempt to engage you was an expression of guilt/remorse or seeking forgiveness?<<

A more appropriate time for this approach would be after she leaves the school board.

This could be a variation on the "we know where you live" type of threat. It's certainly very creepy.

As a long time employee of the district I have often wondered how she got every employees birthday. I thought there were laws regulating what type of information that the district could release regarding employees?

I just assumed this was Randy's effort at a April Fools joke.

This is off topic, but what happened to the group who was looking into getting Joplin teachers raises? Is that a "NO GO"?