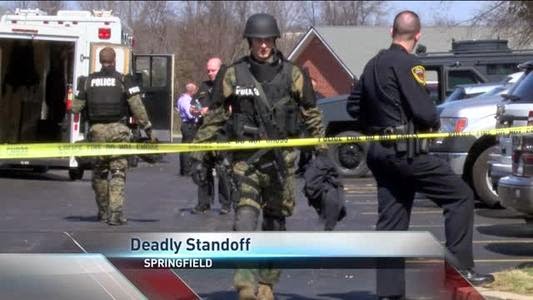 A day-long standoff at the Lakeshore Apartments ended with the suicide of the former Highway Patrol communications officer. The children, aged 2 and 4, who were in the room with him, had been murdered before the standoff began, according to Springfield Police.

Police officers say William "Bill" R. Williams, 51, shot 4-year-old Brodie Williams, and his sister 2-year-old Marley Williams on Sunday night and then turned the gun on himself Monday during what became a 22-hour standoff with a special response team at the Lake Shore apartment complex on the southwest side of town.

"I think there are a lot of unanswered questions," Police Chief Paul Williams said.

The accompanying videos are the complete Springfield Police Department press conference and KOLR's coverage. The photo is also from KOLR.

What a pathetic scumbag

Makes you wonder what happened to make him snap like that. Cuz apparently he was one of "the good guys" at one time. Sad to hear. May God hold u tight little ones. R. I. P