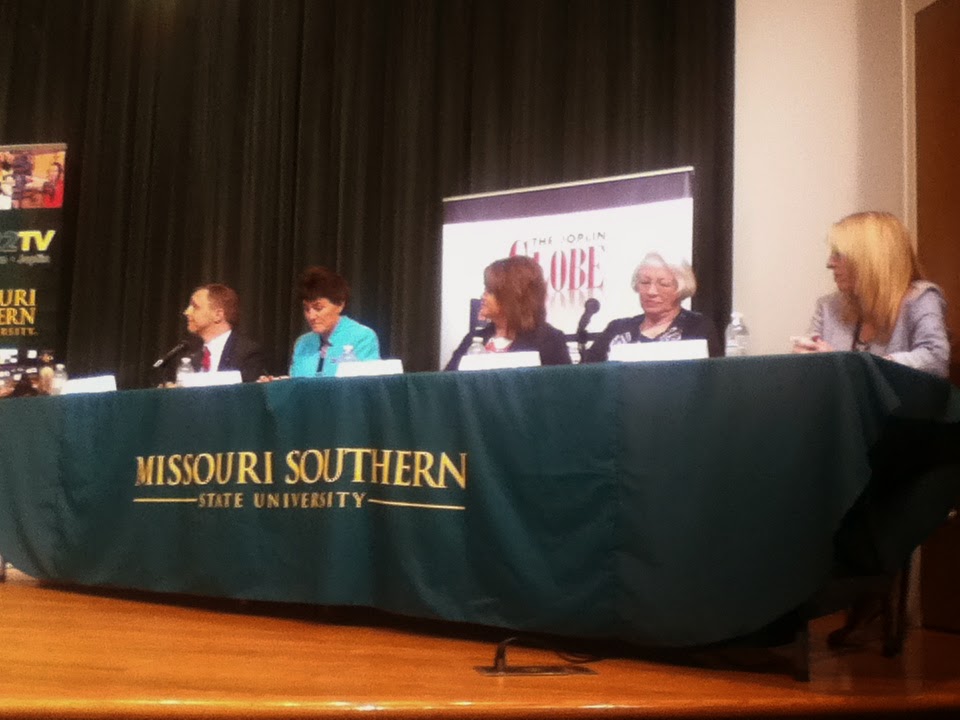 One of the most telling moments in tonight's Joplin R-8 Board of Education candidate forum came when JHS senior Rylee Hartwell, a member of the questioner panel, asked about the candidates' feelings about Joplin's performance on MSIP5 (MSIP stands for Missouri School Improvement Plan.)

It was one of several questions that were posed to two candidates chosen at random, and unfortunately for them, the candidates chosen to answer this question were Melinda Campbell and Nancy Good, two of three candidates, along with Jennifer Martucci, for the one-year unexpired seat, which opened when Dawn Sticklen resigned after enrolling her daughter in the Webb City R-7 School District.

"I do not feel I have enough information about the topic," Campbell said.

"I have not had the time to look at it," Good said. "I don't have enough information."

When the Missouri School Improvement Plan is how the state judges the Joplin R-8 School District and a large part of it is based on test scores, it might be a good idea to already know something about it.

Though Koch was not one of the candidates who was asked that question, he returned to it in his closing, saying that he had looked over Joplin's MSIP results dating back to 2002 and noting that scores were dropping every year. "We need to focus on academics," Koch said.

Moments earlier in her closing statement, Board President Anne Sharp, who along with Koch and former Joplin Police Chief Lane Roberts, are on the ballot running for two three-year seats, had talked about academics and scores, noting that it was tough to hit a target that was continually moving, an excuse the district has made the past seven years as test scores have decreased each year since C. J. Huff arrived.

Koch politely shredded that statement in his closing remarks.

"Every district in the state has the same moving target," he noted. "If they can do it, why can't we?"

"Simplify and focus," Koch said in his closing speech and several times earlier, with the idea being to make academics the central focus of the district, rather than buildings and events.

Koch's message of academic emphasis and fiscal responsibility made him the big winner in tonight's candidate forum, but he wasn't the only winner.

Jennifer Martucci- Martucci clearly displayed a knowledge of what was going on in all district schools, and brought up the ridiculous spending of nearly $100,000 after the seats in the high school gymnasium were the wrong color. While other candidates were downplaying the idea that the board had overspent on the building projects, the fact that $74 million in loans were needed to stay afloat would indicate that too much money was spent, she noted.

Lane Roberts- Roberts was appointed to a well-paying job, instead of having to sit through a forum for a job that does not pay a cent. And judging from Anne Sharp's performance tonight, Roberts may still be elected (though he will not serve).

Judy Stiles- As always, Judy moderated the event with style and class and brought a professionalism to the proceedings.

The Questioning Panel- It would have been easy to have avoided asking a C. J. Huff question, but the question was asked and so were questions about the district's finances. Not enough questions were asked about academics, but even with that, I would say the questions were on target.

Joplin R-8 Voters- You do have choices this year. And the choices are clear. If you are comfortable with the direction in which the district has been heading, you have candidates to support. If you are looking for change, there are candidates who favor change. In the past, we have not always had a choice when we went to the polls.

Joplin Globe- There was a low turnout and the Globe did not exactly promote this extensively. It was written about on an inside page and I don't recall ever seeing it on the Globe's Facebook page. However, I did have a confirmed Michael Beatty sighting and snapped a photo in case anyone doesn't believe he actually exists. (Beatty is the Globe's publisher.)

Anne Sharp- When she noted that C. J. Huff had always done exactly what the board wanted him to do, pointing out the higher graduation rates and the building project, she seemed to be indicating that he has never done anything about academics and test scores because the board has never asked him to tackle that problem. Shouldn't Anne and the Board have been emphasizing academics every year? That is why children are attending school.

Melinda Campbell- She gave no hint at all of having prepared to run for the Board of Education. The idea of coming to the board without having any idea of what is going on and learning on the job is not a good one.


Nancy Good- Same as Melinda Campbell. C. J. Huff could have written her talking points
Posted by Randy at 8:53 PM

In watching the candidate forum, I was impressed with Jennifer Martucci and Jeff Koch. They were knowledgeable on the issues and intelligently answered the questions. I was equally unimpressed with Campbell and Good. Their answers displayed more ignorance than anything else. Annie Sharp seems to believe she must be re-elected because she's an "eagle" and has nothing else to fill her life. That does not make for a great board member. If her goal is to spend her days roaming school hallways and attending athletic events, I'm sure it can be arranged for her to do that. As a school board member, I want an individual who can make common sense, realistic decisions to put this school district back on track.

How Annie Sharp can be on the school board for 17 years and still be so ignorant is beyond amazing.

As for Campbell and Good, their prep for being a school board member apparently consisted of learning to say "Yes C.J, whatever you want."

I wish Roberts would have stayed in the race until after confirmation to his new position. But, I will still vote for him (along with Koch and Martucci) to force the school board to appoint someone to fill the position.

There are 5 members of our family who are of voting age. All 5 of us are voting for Koch, Roberts & Martucci on April 7th.

If Roberts receives more votes watch the school board appoint one of the losers.

Please see Randy's response on March 19 (see below) as to what may happen if Lane Roberts should win. It would be up to the school board to make the selection with the possibility of 3 on one side and 3 on the other side. It is hard to say that the school board might due.

It depends on who wins. From what I have seen so far, Sharp, Campbell, and Good are all likely to support the status quo, while Koch and Martucci are not. If Roberts, Koch, and Martucci win, then the board would probably be a 3-3 split (not counting Roberts, of course). That would mean there would either have to be a compromise candidate or one group would have to convince someone from the other group to change sides. If Roberts and Sharp were elected, and either Good or Campbell won the one-year seat, you would have business as usual, probably for at least the next two years. A write-in candidate would have an uphill battle. You would have to find someone with some name recognition and a good reputation, but then you would also have to educate the public on how to cast their write-in votes properly. And remember that there are only 19 days left before the election.