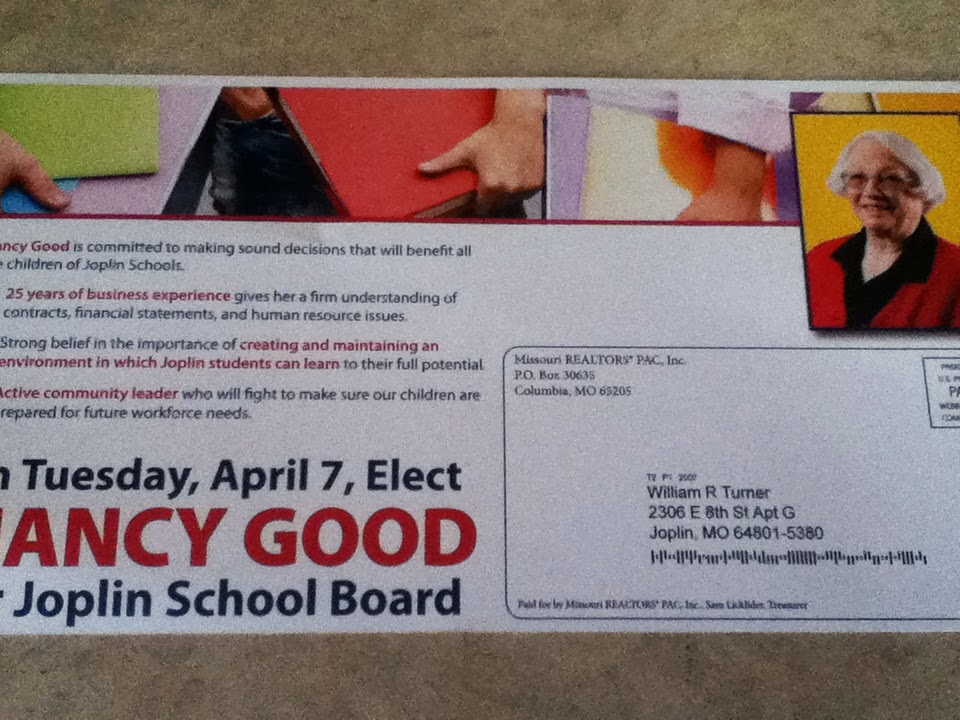 The Joplin Progress Committee, the same group that brought us Wallace-Bajjali, is doubling down on its efforts to elect Bright Futures USA Chairman Nancy Good to a one-year, unexpired seat on the Joplin R-8 Board of Education.

In addition, the Missouri REALTORS PAC has spent $5,520.43 with at least some of that amount paying for a mass mailing.

Those who contributed to Good during the last four and a half weeks include the following:

Those who have contributed to the Joplin Progress Committee can be found at this link.

That's crazy. It reeks of desperation so CJ can keep his guaranteed vote count on the board at 4. I won't vote for her if she spends a million. You get judged by the company you keep, and anyone in JPAC and CART and BF will never get a vote out of me. Crooked all the way and don't want folks to find out what they've done.

They didn't give Anne Sharp anymore. I wonder if they wrote her off or if she's trying to distance herself. That won't work since she and her partner Good are sharing sign space all over town. Politics does indeed make strange bedfellows.

This woman thinks that Huff has done a wonderful job with district finances. The district has been billed an additional $7 millions dollars for electrical work at JHS/FTC as a result of Huff's mismanagement. And now the district is suing the electrical contractor! How much will this lawsuit cost the district? We can't afford for Nancy Good to be elected to the board! Vote for Koch, Martucci and Roberts!

Good lord. It's starting to look like big city politics around here. Like Chicago or Detroit. Ugly. It won't help her one bit. She's allied herself with Huff and that's all the evidence I need to vote against her. She obviously isn't very smart.

For whatever reasons, the JPC wants to keep Huff in power. Makes you wonder if they have vested interest in area private schools and other area school districts. They're the only ones who will benefit with Huff's continued misleading of the Joplin School District.

Why in the hell would somebody spend that kind of money for a volunteer job. Just proves you have to be nuts to be on the school board.

Good, Sharp, and Huff are all members of CART with Woolston. They are also all part of Bright Futures USA. There is so much to hide between the schools, the city, and BF that they can't afford to lose.

Here's a story for you. Last week a guy went around town picking up signs for Koch, Martucci, and Campbell. Said they were to close to the curb. Had to be 15 feet away. Didn't pick up signs for Sharp and Campbell. Almost none of theirs are 15 feet from the curb. So that's what money can buy you. I wonder what the city paid to have that done and who authorized it. Somehow I'm betting Woolston had his nose in it. Corrupt all the way.

Very disappointed in Richards. Talks out both sides of his face doesn't he.

Desperate times call for desperate measures. And CJ Huff is as desperate as he can get. Time to get the pitchforks and lanterns out and run all these folks out of town.

Sharp and Good's willingness to spend over $10,000 campaigning for a non-paid position speaks volumes about how they will spend taxpayer's money.

A vote for Roberts is a vote for Sharp, as he's not running and board will pick replacment.

A vote for Roberts is NOT a vote for Sharp (get that thought out of your head). Assuming Martucci, Koch and Roberts win - then the school board will have to select a replacement for Roberts (to a one year term). As has been explained MANY TIMES on this blog - the school board vote then will probably be 3 to 3. If this is the case then some type of agreement will have to be reached for a new candidate.

Good is a Huff and Bright Futures "Kool-Aid drinker".

What a waste of money! Senile. Why would anyone spend that kind of money. We need new more progressive people on the board that understand the "now" and the future. People should ignore her name completely wasting that much money period.

She's a total wanna-be and will stop at nothing to get what she wants. Herself out there. I'm glad that she has proven her incompetence to the Town of Joplin

For her own use. Secrets! That's what she's all about