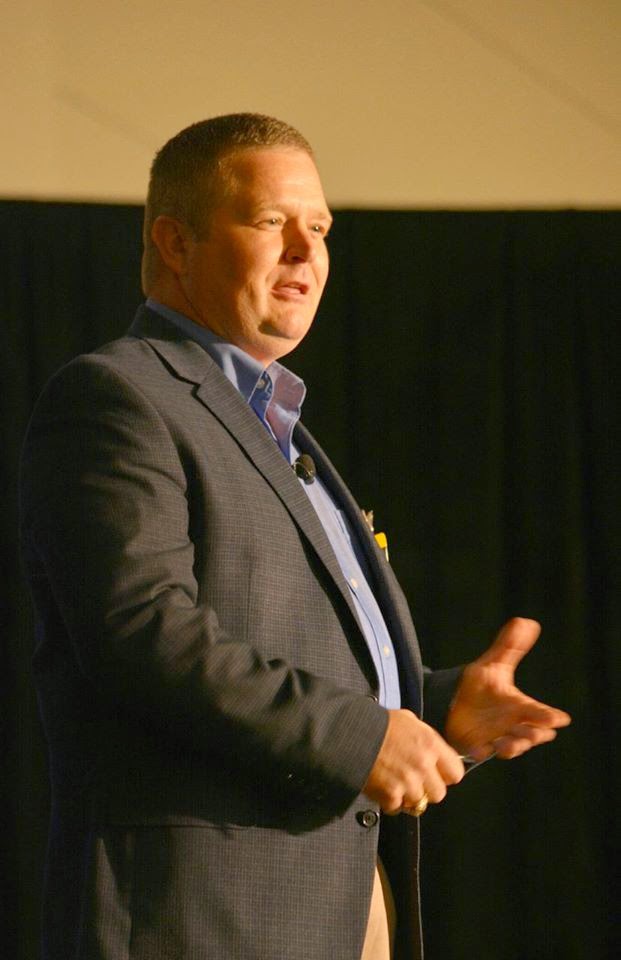 In an article on Joplin R-8 administrators' travel which was published on page one of today's Joplin Globe, C. J. Huff referred to trips he had made to Baltimore and to Washington. D. C., as well as some in Missouri.

What he did not mention speaks volumes.

None of those are mentioned.

If we take at face value the information Huff provided to the Globe that would indicate that taxpayers did not not foot the bill for much of Huff's extensive travel. That is a good thing.

But it has nothing to do with the reason why I filed a complaint with the Missouri Ethics Commission last week about Huff's speaking engagements.

I have been asked what difference does it make if Huff is making money making speeches as long as the taxpayers are not paying for it.

I have also had a lot of people thank me for filing the complaint.

When C. J. Huff has been challenged about the need for borrowing $74 million, he wrote a post on his blog.

When people were criticizing the six-and-a-half-mile ribbon, he wrote a post on his blog.

When he was under fire for saying the high school had not failed an inspection when, in truth, it had, he wrote a post on his blog.

Huff has been under fire for months about his speaking engagements. He has made no such post on his blog.

The two high school students who first exposed Huff's Washington Speakers Bureau connection were harassed for months after their revelation and their blog was effectively shut down by Huff, who did so by placing pressure on their parents and letting them know how much their activities could harm their bright futures.

Huff's financial disclosure documents, filed annually with the Missouri Ethics Commission, do not show any money for speaking fees. The documents are signed under penalty of perjury.

This does not mean that Huff has necessarily violated the law. There are other possible explanations:

-Huff has paid for his own travel and is still traveling all over to thank people for the help they have provided to Joplin and to the Joplin schools.

-Huff is donating any fees he receives to charity or having it placed directly into whatever charity or charities he designates. It does seem odd that if the money is going to charity, that Huff has not said a word about it. When a man's advertising bills him as the hero of the Joplin Tornado, modesty is obviously not his strong suit.

- The money is being paid to someone else. That would seem to be getting into shaky territory.

-Some other, perfectly reasonable, explanation. Perhaps it is all expenses and no fees. Again, that would seem to be shaky territory.

-He forgot about his speaking fees three years in a row.

I have no idea which explanation is the right one, or if any of them are correct.

Why does it matter?

Over the last few years, and perhaps since he first arrived in Joplin in 2008, C. J. Huff has consistently shaded the truth, to be charitable, to whatever will build his public image. If he is making outside income, the public has the right to know. That is why superintendents of larger Missouri school districts are required to fill out financial disclosure forms.

Turner Report investigations have shown that Huff spent four work weeks absent from the school district during 2014. A couple of those days were covered in today's Globe story, though I am skeptical about what good Huff and Kim Vann going to Baltimore for a national conference on public relations is going to do and why we needed to spend money on it at a time when funds are dwindling.

If C. J. Huff were surrounded by competent administrators, his absences might not be that much of a problem, but when the aides he is surrounded by include Tina Smith and Mike Johnson, neither of whom have a background in education, Jennifer Doshier, who was promoted to a top job after failing miserably as a principal, and Lisa Orem, who as the state audit noted, was not even qualified for the $101,000 a year job she held, he is not exactly leaving us in capable hands. A strong leader feels comfortable surrounded with people with talent and/or experience. It is not certain there is any improvement when Huff is in Joplin, but when he leaves, the inmates are truly running the asylum.

And finally, we are paying him far more than his predecessor, Jim Simpson, received, and Simpson had this district accredited with distinction his last four years. Scores have gone down each year since Huff arrived (that would be seven years now) and the district's top educational leaders are great with buzzwords, but sadly lacking in substance. If we are going to pay Huff that much money, he should be required to earn it.

The text of my complaint to the Missouri Ethics Commission is printed below:

Since the May 22, 2011 Joplin Tornado, Superintendent C. J. Huff has given dozens of speeches across the United States and in Canada telling the story of how he determined immediately after the tornado that school would begin on time less than three months later, despite the fact that five schools had been destroyed and another five buildings damaged.

After the schools did open on time, Huff became a popular speaker, so popular that he has been listed with the Washington Speakers Bureau, which, on its website (http://www.washingtonspeakers.com/speakers/speaker.cfm?SpeakerID=7679), says that he charges $7,501 to $10,000 per speech and is available for keynote speeches and panel presentations.

In the July 27, 2013 Joplin Globe, http://www.joplinglobe.com/news/local_news/thank-you-visits-drive-joplin-school-travel-costs/article_9b25fdca-e6e5-58f0-a31b-244cb0b85125.html , Huff said he had been contacted by the Washington Speakers Bureau and had done only one speech at that point, but his profile on the website has been updated since then and the information from that profile is what has been used at a number of the events at which he has spoken.

In that same Globe article, a number of speeches were listed as having the school reimbursed for the costs, but nowhere does it say which speech Huff gave for the Washington Speakers Bureau and his financial disclosure forms for 2011-2014 do not list any speaking income. The only outside income listed is from a family rental business in McCune, Kansas, and “rental income” is the only outside income listed.

In the summer of 2012, Huff asked me to stop writing on my blog about speeches he was making because “I have been receiving threats.” Since I was only reporting on the speeches being made by Huff and other locals because I was covering the stories surrounding the tornado and since Huff was my boss at my full-time job as a teacher at that point, I complied with his request.

In the summer of 2013, two Joplin High School students, Laela Zaidi and Rylee Hartwell, started a blog called Joplin Schools Watch. Miss Zaidi called the Washington Speakers Bureau, asked about Huff’s speaking and was told that he spoke frequently for the bureau and charged $8,000 plus travel expenses. The student blog was shut down, but the recording they made of their conversation with the Washington Speakers Bureau representative is still online in several places, including this link- http://rturner229.blogspot.com/2014/05/ethics-commission-documents-c-j-huff.html

An organizer of the New Mexico Mines and Safety Conference held May 7, 2013, confirmed to me that he had hired C. J. Huff as a keynote speaker through the Washington Speakers Bureau. http://rturner229.blogspot.com/2014/10/c-j-huff-paid-for-workweek-speech-in.html Again, the 2013 financial disclosure document does not show any payments for this speech or any other through Washington Speakers Bureau. I have the e-mail sent to me from New Mexico if that would be helpful.

Among the speeches made by Huff in 2014:
Thursday, Jan. 23- Wisconsin Association of School Boards

The information on all of these speeches is readily available online and has been documented, complete with advertising for the events, photos from the events, and comments from those attending events on my blog, The Turner Report at http://rturner229.blogspot.com The same is true for these speeches, which were given by C. J. Huff in 2013:

Tuesday, May 7- New Mexico Mine and Safety Conference

Thank you for your time and consideration.

Just curious, if the allegations are confirmed...what type of penalties can result from the ethics commission? Are there any teeth that can come into play or just a routine announcement stating that there are issues?

This would be gross misconduct for any other employee and justification for termination. But not for the Teflon Superintendent.

The dishonesty of the Huff administration has become so everyday that they have become grossly arrogant. There have been no repercussions from his board, or more correctly, ours. I hope the Ethics Commission will hold CJ accountable, should this prove out. I think his back is against the wall, because his "articles" in the Globe reek of desperation and spin. They sure don't reflect any truth. I want him out this year so maybe my kids can have a few years of good education before they graduate. The election is our nearest hope of that.

The "Teflon Superintendent" is such because the board for whom he works is corrupt, including Ms. Banwart who makes such a scene about her religion. Always at the altar but it seems to disappear at board meeting time. The same can be said about Steele and Sharp. He should have been fired years ago, but they are too stupid or too corrupt to see what is right in front of them.

I somehow doubt that CJ Huff was receiving death threats when he told you to stop writing about his trips. He was afraid people would realize how often he was gone and how much money he was making off their misery. He is scum. The scum of the earth hiding behind his prayers. Those are the worst kind of charlatans. He must go, and quickly. He should also be sued for exploiting the district to make his profit.

Is there anybody left on the school board with any backbone. Did everyone vote yes for the recent loan, was it 28 million.?
Yes we had to build a new school. But did they really need everything in the same year. All the extras. Most of us add on as we we can afford it. And don't forget the ridiculous seats at the high school. And love that the elementary storm/safe room has an electronic scoreboard for all those championship games for grades one thru five.

Interesting that if you serve on jury duty, you must give the district your jury duty pay or be docked a day. If you live in Newton County and have to go to Neosho, that jury pay would at least help with gas.
That certainly is different than Huff and Co. who are wined and dined AND being paid their district salary plush he gets that speaking fee.