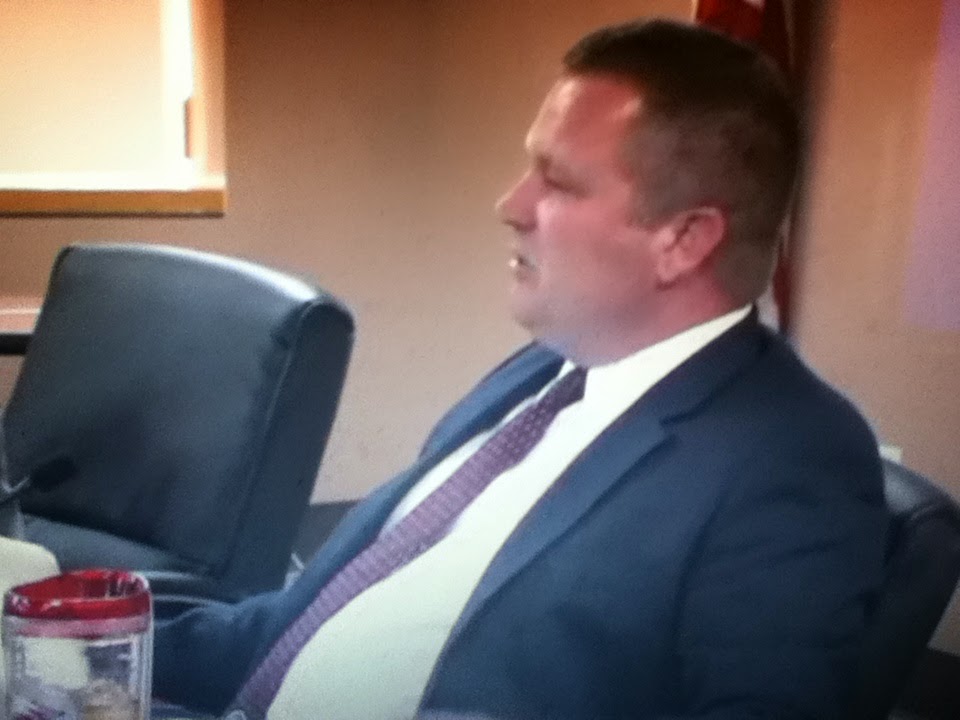 Joplin R-8 Superintendent C. J. Huff told KZRG Tuesday night that he had given Board President Anne Sharp permission to have her public relations team shoot a campaign video during a teachers' professional development meeting February 20.

Superintendent CJ Huff tells News Talk KZRG everything was by the book.

"The Board policy stipulates that if somebody wants to shoot video or take pictures on our school campus, somebody from the outside, they need to seek permission from the Superintendent, being me, and Annie did that."

The fact that neither Huff nor Sharp, who refused to comment to KZRG, see any ethical problems with shooting this video with a captive audience of teachers, says a lot about both of them.

Huff also told KZRG that the meeting was not staged for the campaign video, noting that it had been on the calendar for months.

As usual, this is a case of Huff revealing a portion of the truth, but omitting relevant details. Huff was the one who sent all employees an e-mail talking about the important announcements he was going to make. More than $12,000 was spent as "incentives" for teachers for this meeting. The teachers were then used as a backdrop for a campaign video.

Knowing that Huff and Sharp were doing this was likely to keep any employee from protesting since we have seen the lengths Huff is willing to go to in order to punish those who have crossed him.
Posted by Randy at 6:20 AM

DAVID WALLACE WITH WALLACE BAJJALI HAS JUST CRAWLED TO BANKRUPCTY SO HE CAN STICK IT TO ALL THE INVESTORS. HE'S SUCH A CROOK. HE KNOWS HOW THE PLAY THE COURT SYSTEM AND GAIN FROM HIS CRIMINAL ACTIVITY. I HOPE HE'S NOT SO LUCKY IN A CRIMINAL COURT.

Once again, if you are part of CJ's inner circle, anything goes.

If Jeff Koch or Jennifer Martucci had made the same request, I'm fairly certain the answer would have been NO!

Patrons we have to vote her out!

All righty then! Nothing to see. Move right along.


But did the teachers all sign a waiver giving their permission to be on a tv commercial. And if they accepted the $12 mug? or whatever was their talent fee. I protest my taxes being used on mugs, tumblers, whatever. I would rather hand them the cash as a pay check.

The ol decider CJ's looking more and more like Billy Long. That's not a good thing. It could be that being all for the kids must not be burning enough calories to stay ahead of the expense account. He might need to put some of those expensive athletic facilities to use.

I thought Dr. Huff's behavior toward Dr. Fort last night was unbelievably unprofessional. HE works FOR HER, not the other way around. The entire Board should have admonished him for his demeanor. It was unacceptable. That money does not belong to him, it belongs to the public, the same public that elected Dr. Fort to make changes in the way things are done in Joplin Schools.

We will elect Koch, Martucci, and Roberts next, and that will help even more to restore respect and responsibility to our district.

Even if CJ approved it, it should not have been done unless all the candidates were given the same opportunity and if the people being videoed consented. I did not and would not have consented to being a part of Anne Sharp's video. I do not wish to be used in such a manner by any candidate, but if I did, I want the right to choose. His approval means nothing to me.

Everything Cj and Anne do simply reflects their defensiveness. For the first time they are having to justify themselves and answer up for their actions, and they cannot handle it. Cj is defensive and out of control and Anne won't even discuss what is happening. They should both hang it up. There's no stopping this train wreck now.

Randy, you are able to find some of the most unflattering photos of people but this one has to be the worst (or best) yet! It looks like CJ's ego isn't the only thing that has been inflated.

Check the district policy that they are referring to. It addresses "outside agencies". Sharp is a board member and an officer of the board. That in it self is a violation of the policy AND is UNETHICAL!

8:07, the posted Board Policy you refer to was secretly rewritten to support Huff's actions. Someone with ethics, made sure that this deception has since been corrected and the true Policy is now posted.

Randy, it might be a good idea to find a hard copy of the Board Policy printed between January and February of this year. You could even verify all of the Policy revisions over the past seven years with official Board minutes.