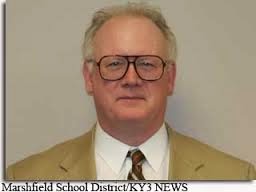 The Marshfield Board of Education voted 5-0 Monday night to put Superintendent Mark Mayo on a paid leave of absence and he will not return to the position.

Mayo is the former superintendent of the Diamond R-4 School District, taking that position after the death of Greg Smith in 2001 and serving through June 2008.

Mayo has also been a Carthage City Council member, a lawyer, a banker, a social studies teacher at Carthage Senior High School, and a principal at Southwest. He was hired as principal at Diamond Middle School for the 2001-2002 school year.

KSPR in Springfield indicated Mayo's dismissal could be connected to sex charges that were brought against a Marshfield teacher.

Assistant superintendent Alan Thomas, a former principal of Marshfield Junior High, is now the interim superintendent. Thomas couldn't provide any more of a reason for the board's action in a telephone interview on Tuesday morning. He said the board voted last month not to extend Mayo's contract, which was scheduled to expire in June 2016.

Thomas didn't know whether the board's decision had anything to do with controversy over a Marshfield teacher, Johnna Feazell, who was charged last October with having a sexual relationship with a 16-year-old female student. The district put Feazell on paid leave after she was charged, and then fired her on Nov. 30.

After Feazell was charged, some parents said they'd complained to the district the previous year about inappropriate behavior by Feazell. The district acknowledged Feazell received two written reprimands in the previous school year for having inappropriate contact with the student at the center of the criminal charge.

So Turner or whatever your name is...have you ever heard of the concept or practice of jounalism? You should try it. I read this and you say "KSPR in Springfield indicated Mayo's dismissal could be connected to sex charges that were brought against a Marshfield teacher." This is some kind of source for you? So what does "indicated" mean? How did they "indicate" it? And if they did, where is a source? Who is the source...do you or KSPR claim to have one? Every statement given by any school board member said it had nothing to do with the so-called sex scandal. So because some local TV station mentions a possibility of something, you repeat it. You don't do journalism, you just read other articles then repeat it as fact? Try a class in journalism 101. What you are doing here is 100% outrageous and has no connection to any kind of legitimate journalistic effort. I'm guessing you know that because you do the same thing in many of your other "blog posts".

I see that on your site you advertise the sleaziest of companies and worthless, scam products. Par for the course.