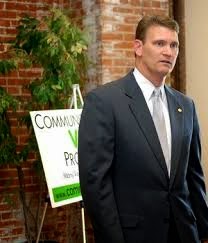 Saying that he owes between $10 million and $50 million, former Joplin master developer David Wallace, filed for Chapter 7 bankruptcy Tuesday in U. S. Bankruptcy Court for the Southern District of Texas.

The filing took place on the same day a status hearing was held in the receiver's action against Wallace and Bajjali.
Posted by Randy at 7:15 AM

Wallace the CROOK: If today he files bankruptcy, THEN WHY BUILD AN $87,000 POOL in his house? Was the mistress more important? If he didn't have money, THEN WHY HAVE A LAVISH WEDDING ON SOME EXOTIC BEACH with the mistress? If he didn't have money, THEN WHY DID HE BUY A NEW CAR for the mistress? If he didnt' have money, then why did he pay himself an over the top SALARY? If he didn't have the money, Judge Bohm hopefully looks at the whole picture and makes this crook pay for what he owes. He's a scammer and psychological liar. He must be put behind bars. He has destroyed so many lives and communities, has robbed them of their retirement accounts, their college funds, has put so many in debt, taken loans from others when he knew he would never pay it back. This was his grand plan - bankruptcy. He's a master scam artist. God save us from this crook. But like Frishberg said one time "ITS ALL ABOUT HIM, DAVID WALLACE only cares about David. IS ALL ABOUT DAVID". ***Self absorbed pig***

I noticed 4 state homes or Mike Woolston was not listed.

He even listed the new wife, Jennifer Dawn Wallace. Trust me this man knows the system. I'm sure they are both conspiring in concert with each other. I don't trust her as far as I can throw her. For now, lets just sit back and eat our popcorn as this nightmare unfolds. The Judge for the bankruptcy is a very tough judge and if he sees a scam in front of him, he'll take care of matters. Nobody messes with this judge.

Go on take the money and run, woo woo woo.

It appears the investors are not surprised by this con artist. When you're dealing with a slick oil salesman, and has a history of going to bankruptcy to wipe the slate and protection, what else to expect. Meanwhile in Fort Bend County, Lowery Bank is demanding a writ to garnish funds and have knowledge of bank accounts they possess. By now David Wallace and his co-conspirator, Costa Bajjali, have probably closed those accounts. Rumor that they might move assets out of the state/country. I don't know where the bank got its information. I'm sure there is reason for this. More to come...

Thus, today in Joplin, political stalemate is all around us. The only way out of it is good, great leadership. And we fired the best city leader I have ever seen in living around the country for decades, Mark Rohr, simply because he was a “bully” for Christ’s sake!!!

As well Turner and his supporters want to do the same thing to another great leader, C J Huff who literally brought about five different schools out of the ashes in three years, got public approval to raise taxes, etc. Absolutely crazy thinking in my view to rid our city of good leaders, honest men and hard workers. And yes, I put David Wallace in that camp as well. I have met the man, talked at length with him, challenged him strongly and always gotten solid answers, answers that make sense to me, right back from him. I have also done the same things with Dr. Huff, thanks to his willingness to even speak with me, an old rabble rouser of sorts with strong views on education.

At the national and international level there is no way I can go one-on-one with leaders or want-a-be leaders. I have to rely on the internet, the media and other sources to form my views. But locally, well sit down with the likes of Bill Scearce, listen to him for over three hours and then decided, him or David Wallace or Mark Rohr. The choice to me was very simple after doing exactly that, look men in the eye and deciding for myself just what kind of men they might be.

The more I read about this I think they should look at crossland const. wallace came up here to talk to them the day the tornado hit then ole Raymond quit crossland and went to work for wallace who pointed wallace to prime HMMMMMMMMMMMMMM

The City of Joplin? How much does he owe and for what?

They should also look at any deals he made with Cj Huff. Dirty deals.

You can bet there are Mexican gangs just waiting for the moment they can get their hands on this guy and force him to tell them where the money is stashed.

His daughters trust accounts should also be examined

All of them need to be thoroughly investigated. I bet the investigation will reveal money laundering, tax evasion, a ponzi scheme, commingling of funds. Potential prison for himself and his daughters, possibly the new wife.

It is unheard of for people to go to jail for their debts; get a clue. Texas is a great state to shelter your assets from bankruptcy, too. Joplin has been had. The city was foolish for hiring a firm that was being fined by the SEC. Wallace Bajjali was shady from the get go and I suspect the folks who hired them are, too.

Scumbag city all around. Raymond Braswell et.al birds of a feather. Narcissism anyone?

You can go to jail for fraud. He most likely wont unless there is some hidden account that he has lied to judges about.