A monitored conversation at the Jasper County Jail has led to felony witness tampering charges against a Jasper woman.

According to a probable cause statement, Audrey Taffner, 31, Jasper, was visiting her husband, former Jasper Fire Protection District chief engineer Jarred Taffner, 30, in the jail, where he is awaiting trial on felony child molestation and sodomy charges, when the conversation took an illegal turn.

Jerred and Audrey discussed different ways which may prohibit juvenile (name withheld) from testifying in court regarding the sexual abuse. These conversations were recorded due to Jerred being incarcerated at the time.

If she is convicted of this charge, she will not be eligible for parole.

Judge Joseph Hensley set the bond for Audrey Taffner at $25,000 cash only. If she is able to post bond, she is to have no contact with the witness unless supervised by the Children's Division, according to Jasper County Circuit Court online records. 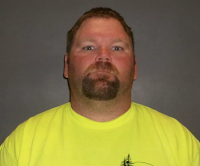 Jerred Taffner waived his preliminary hearing Thursday and was bound over for trial. He will be arraigned 9 a.m. August 27 in Division I.

Taffner allegedly molested the underage girl at least four times during the past year, according to the probable cause statement.

He is being held in the Jasper County Jail without bond.

Sounds like are both disgusting excuses for human beings. Lock them both up for at least 10 years. The wife is as guilty as him.
If I had found out my husband was molesting an underage girl, he would be begging the authorities to lock him up to get protection from me. I sure wouldn't be visiting him in jail plotting with him against the victim.

These two are a real piece of crap. #pos #wasteofskin #Hangthemhigh