Accused Carthage child molester to police: I may have accidentally touched (6-year-old girl) there 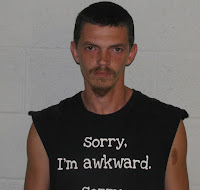 A Carthage man is being held in the Jasper County Jail on a $100,000 cash bond after being arrested today on child molestation charges.

The charges are in connection with a July 5 incident at a Carthage home, according to the probable cause affidavit filed today in Jasper County Circuit Court.

A six-year-old girl said she had been touched inappropriately by Dennis Suggs. During a separate interview, another child who was in the room at the time said Suggs had touched the child between her legs with his fingers.

Suggs, his girlfriend who is the child's mother and the child were seated on a couch, according to the probable cause statement. Suggs was "tickling" the girl on her inner thighs with both hands.

After a while, the child shouted, "Hey" and covered herself.

Suggs told police he would not have touched the girl in that way.

He later told police he may have touched her there accidentally.
Posted by Randy at 5:10 PM

Again, children being victimized, we can almost predict the outcome. Plea deal, slap on the hands, back on the streets to victimize again. Are these the first victims or first time he got caught?