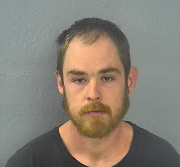 An Anderson man pleaded guilty to child pornography charges this morning in U. S. District Court for the Western District of Missouri.

Judge David P. Rush ordered a pre-sentence investigation for Levi Erwin, 28, at the conclusion of a 12-minute hearing. No sentencing date has been set.

Erwin's crimes, including dealings with a former Joplin resident, Paige Cagle, 25, who is facing child pornography charges in U. S. District Court for the Eastern District of Kentucky, were described in a detention motion filed Aoril 1:

Erwin knew Cagle as they used to work together. Erwin disclosed that the two engaged in sexual conversations, including Cagle sending him a video of Cagle vaginally stimulating a two-year-old minor female.

On February 21, 2019, TFO Roller conducted a forensic examination the defendant’s phone and located chat messages within the KIK application between the defendant and Cagle, as well as images and videos.

During those graphic conversations Cagle asks Erwin if he liked the genital area of underage girls.
Erwin asked Cagle why she asked him that and she said she knew his girlfriend was 15. Cagle sent a photo of a girl she said was nine years old.

HSI/ICE and the Kentucky ICAC Task Force located Cagle in Lexington, Kentucky, and Cagle admitted to sexually abusing minor females for several years and creating images and videos of the sexual abuse. Cagle identified Erwin as an individual she was trading child pornography with.