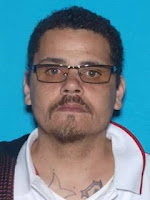 A Florissant drug dealer shot Jasper County Deputy Nolan Murray March 1, 2017 at the Econo Lodge on Rnnge Line because he thought the Joplin Honkies, an area gang, were out to get him.

That was the argument made by Joplin attorney Bill Fleischaker during his opening statement at E. F. Fitchpatrick's trial on assault and armed criminal action charges Monday in McDonald County Circuit Court in Pineville.

The trial is being held in McDonald County on a change of venue from Newton County.


Fleischaker said Fitchpatrick thought the Honkies were coming to take the drugs the Florissant man brought from Texas to sell.

Newton County Prosecuting Attorney Jacob Skouby said deputies had announced who they were and why they were well well before Fitchpatrick shot Murray.

Murray and an officer with the Ozarks Drug Enforcement Team testified.

Fitchpatrick's criminal background was detailed in a May 16, 2017 Turner Report post:


The defendant has prior felony convictions for Tampering with Service Utility, Burglary, and Possession of an Illegal Weapon in March 1991, Possession of an Illegal Weapon in March 1995, three counts of Forgery in November 1998, and two counts of Distribution of a Controlled Substance in May 2005. The defendant is presently incarcerated in the Missouri Department of Corrections as a result of a parole violation predicated on this pending case, and is therefore not eligible for pre-trial release.


Online court documents also show Fitchpatrick being charged numerous times with domestic assault and on two occasions, in 2000 and 2005 had protection orders entered against him.
Posted by Randy at 5:05 AM