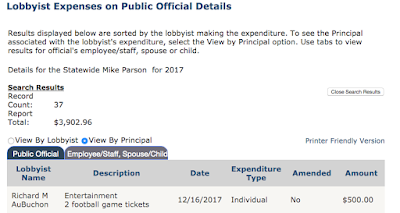 When Gov. Mike Parson was lieutenant governor, he billed Missouri taxpayers for mileage to attend a Kansas City Chiefs game, according to a closeout audit of his former office that was issued today by State Auditor Nicole Galloway.

Parson used his personal vehicle to drive from Jefferson City to Arrowhead Stadium December 16, 2017, and was reimbursed $111.

Parson's expense report did not specifically mention a Chiefs game, referring to the trip as attending "an event with Clark Hunt at Arrowhead Stadium."

Hunt is the Kansas City Chiefs chairman and CEO.

The Chiefs defeated the Los Angeles Chargers 30-13 that day.

The Chiefs game was just one of the questionable mileage reimbursements Parson claimed, according to the audit.

Parson also received a $57 reimbursement for round trip mileage from his home in Bolivar to Branson to attend the 50th anniversary celebration for Presley's Country Jubilee, $224 to "attend a performance by the University of Missouri-Kansas City Conservatory of Music and Dance Friday, November 10, 2017" and "$133 for round trip mileage from Jefferson City to Branson to attend the premier of a theatrical performance on Saturday, March 2, 2018."

The audit says Parson's office did not maintain any records stating the business purposes of those events, though a "former office official" said the lieutenant governor was invited to attend all of them.

In his response to the audit, Parson said his attendance at the Chiefs games and the two Branson events were part of his job of promoting tourism.

He was at Arrowhead Stadium to meet with Clark Hunt and local business leaders "in order to promote tourism," Parson wrote.

"The lieutenant governor had his own tickets as part of his personally owned season ticket package and attended the Kansas City Chiefs game held at Arrowhead Stadium subsequent to the aforementioned meeting."

Parson's response made no reference to the $500 gift from the Chiefs lobbyist.

The tourism response also covered the two Branson trips. About the Presleys' 50th anniversary celebration, Parson wrote, "The purpose of this travl was to recognize the Presley family for the work they do to support tourism in Missouri. In fact, the Lieutenant Governor presented a proclamation at this event..."

Parson said the other Branson trip noted by the auditor was to attend Billy Yates' opening night event to launch his Branson show.

"It should go without saying that Branson is one of the nation's top tourist destinations and an important part of Missouri's tourism industry. The aforementioned travel was directly related to the role of the Lieutenant Governor in promoting tourism in Missouri.

The report questioned Parson's use of his personal vehicle for the trips when "other travel options were more cost-effective."

The audit also questioned some of Parson's claims for reimbursement for travel from his Bolivar residence.

The auditor's news release indicated the following concerns were found in Parson's operation of the lieutenant governor's office:

The Lieutenant Governor's office, which had five to six full-time employees during the audit period, purchased two vehicles in late 2017 and early 2018, at an approximate cost of $33,000. The report indicated the office did not prepare documentation justifying the purchase of the vehicles, and the need for the vehicles was questionable because they were infrequently used. The office also did not maintain complete usage logs for the vehicles, one of which was sold after June 1, 2018.

The audit found that payroll and timekeeping procedures were not adequate. In one case, an intern was paid $2,330 without timesheets to support the hours worked. The audit also found the office did not perform criminal background screenings on all employees, prepare employee job descriptions for some employees, or promptly remove state computer user accounts for terminated employees.

In addition, the Lieutenant Governor's office purchased several items through employee reimbursements, rather than the normal purchasing process or state-issued purchasing cards. In one instance, an employee was reimbursed $525 twice for the same item purchased. After audit staff discussed this issue with office personnel, the former employee reimbursed the state for the overpayment.

The complete audit can be found here.
Posted by Randy at 9:42 AM