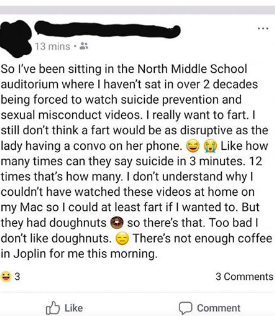 The Joplin R-8 School District's efforts toward implementing required suicide prevention training for employees took a hit this morning when a bus driver's Facebook post describing her frustration that she was having to watch the video in the North Middle School gymnasium instead of in the comfort of her home went viral.

In her post, which the woman apparently intended to be funny, she mocked the video, which is a new requirement following a number of suicides among Joplin students in recent years, and was chiefly concerned that she was unable to perform certain bodily functions in a crowd.

Not only was the woman clearly irritated about the training, but if her description was accurate, she was not the only one sloughing off the training.

The guy behind me fell asleep and was snoring and the lady to the right of me was having an entire phone conversation. All I'm saying is I could have watched these videos at home.


The post was apparently sent during a break in the training session and when she was contacted by Jessica Nugent, a mother whose son Luke a Carl Junction student, committed suicide, she removed the post, said she self-reported to her supervisor and was concerned she would lose her job over the message. 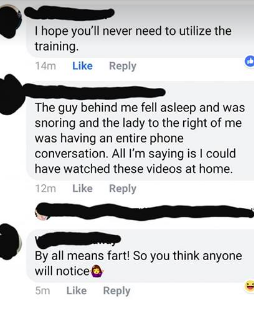 A school board member told Jessica Nugent the matter will be addressed at Tuesday night's Joplin R-8 Board of Education meeting scheduled to begin at 7 p.m. in the Memorial Education Building

"This, my friends, is what is happening inside the walls of Joplin High School!! #joplinproud #eaglepride #jhs #JoplinHighSchool"

This is what's happening in most public schools. The Superintendents only care about money, the faculty and staff are burned out. Kids are the ones suffering!

If people would just stop being so selfish and care about others we wouldn’t be having to bury all of our kids too soon.
#ItsNotAlwaysJustAboutWhatYouWantToDo
#WhyDoPeopleMakeSuchIgnorantFacebookPosts
#JustFartYouChildishBrat
#PrayerForOurKids

I am disgusted with this bus driver's text. Perhaps it is boring to watch these training videos year after year, but the purpose is to try and prevent at least one child from killing himself. If you can't listen to such a serious video, then you aren't going to hear that one child that reaches out to you.

All R8 employees should be thankful they have a job and should care about our children. Sounds like the bus drivers attitude and disgusting comments about bodily functions show her IQ. She should not entrusted to care or supervise our children, all they will leatn from her are slovenly bad manners.

However, let's not forget one other thing, it is not the responsibility of the school system to instil values and morality in your children. That guidance begins the day your child is born. Raise them to be confident and secure individuals. Make them aware of the things that are wrong in this world. Talk to them. Listen to them. Spend time with them. Provide them with a solid spiritual base.

Unfortunately so many families are broken, addicted or suffering from other social afflictions, not every child lives in a stable environment. That's where teachers, counselors and clergy can help take up the slack.

I love our young people and pray for them. This world has become cold and callous. Show love and encouragement to others any chance you get.

No, stop blaming the parents. The schools have failed our children. Parents can't be held responsible for the actions of their kids when the schools haven't done their part. This parent shaming has got to stop.

Parent MUST take responsibility for their children.

Someone needs training on social media use.

I pay taxes that pay teachers and other school officials. They work for me. They are paid to help raise my kids. They need to get their shit together.

It takes a village to raise a child, and requires a lot of love and guidance. Suicide is too frequent today. Anything we can do to change this, needs to happen. Ask not what others can do, but what can we all do to help.

Wow
I hope this person never has to deal with a suicidal student or better yet a family member of their's that may be suicidal. Pathetic. Immature BS

I am in OR and my son was having issues at the middle school. I tried and tried to get the VP and the principal to do something or let me move him to a different school. They told me no and that they could not move him or change classes or anything. Well, 3 months went by and I was getting tired of asking for a meeting with the kid's parents. Mind you there was a handful of them and being denied saying I could not meet the parents my son created a post about the school and I was called to the school. It took them 1 day to move him to a new school after that! it was wrong he had to do that but I tried everything and nothing worked!!

The schools are letting us down. It does take a village to raise children. My husband and I can't do it alone. We depend on the schools to help and they do not do a good job.

Sometimes parents are doing everything they can! But when the child is met with this kind of attitude from staff and even other students it's hard to fight against that. Children don't choose mental illness, it's a fight every day to win against something they are born with. It has nothing to do with parenting. Again, some children attend counseling weekly, and more often sometimes, but going to a hostel environment doesn't help, and it's not always an option to just pull them or move. We should be able to trust our school system, but we can't.

Schools exist to teach students academic, vocational, and artistic concepts and knowledge: reading, writing, math, science, social studies, health, music, fine arts, computer science, home economics, shop, HVAC, automotive repair, etc., etc. ... Instructors are hired for their skills and their abilities to teach in those areas. They are not licensed mental health counselors. For the school district to pretend to parents that forcing a bus driver to sit through a mental health awareness training video once a year is going to give her the tools she needs to take care of your children's mental health needs is dishonest. It's not within her job description to do so, nor should you expect it of her. Her responsibility is to safely transport a busload of children safely without the benefit of seat belts, and if you don't think that's a challenge, you've never been on a school bus. I'm amazed at the way this woman is being judged for pointing out the God's honest truth-she, the other bus drivers, the cooks, and the janitors should not have been made to sit through this training. My heart goes out to the poor woman whose son took his life-I have also experienced the pain of the suicide of a young son-but to blame this bus driver is completely unfair and illogical.

Humor and sarcasm have a long history of being used to lighten tough subjects that are both sensitive to listen to and uncomfortable to discuss. While this may have been inappropriate in many eyes it was equally as inappropriate to utilizes this as a tool to humiliated and shame a person into change. Society is just sick and until we learn to communicate and move forward instead of backwards it will not change.