Josh Hawley: Big Tech is out to get President Trump- fight it by donating to my campaign (and his, too) 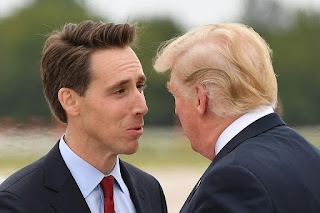 n his latest fundraising pitch, Sen. Josh Hawley, R-MO, warns that big tech is out to get President Trump and the best way you can fight big tech and help the president...is to donate to Josh Hawley.

And if you want, you can contribute to President Trump's campaign, too.

Who would have guessed?

One thing has become clear: Big Tech is dead set on defeating Donald Trump in the upcoming election - no matter the cost. They have started by silencing conservatives across their platforms.


Companies like Facebook, Twitter, and Google have immense power over the information we see and hear. They think they can lecture us about America. These companies have too much power. This needs to end.

I am the leading voice in the U.S. Senate against Big Tech and the silencing of Conservative viewpoints on their platforms, and I have a great ally on my side - President Donald Trump. President Trump has been standing by me in this fight, and I need you to stand with him.

If they want to silence conservative viewpoints, we cannot allow them to play by special rules. Someone needs to stand up for the people of our nation.President Donald Trump is standing up for us, and now you have a chance to stand with him and donate to his re-election campaign so he can continue his outstanding work.