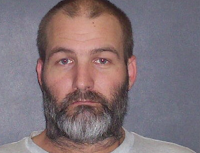 As part of a plea agreement with the Jasper County Prosecuting Attorney's office, a second statutory rape charge against Brown was dropped and he waived his right to have a pre-sentence investigation.

Brown's trial had been scheduled to begin Monday.

The guilty plea was the second this week in the case

On Monday, Brown's accomplice, Amber Ramirez, 37, Sarcoxie, who brought the 13-year-old victim to Brown,  who is her boyfriend, had sex with Brown twice in front of the child, smoked meth with Brown and handed the sex offender a condom before one of the rapes, pleaded guilty to felony endangering the welfare of a child.


As part of a plea bargain agreement with the Jasper County Prosecuting Attorney's office, a statutory rape charge against Ramirez was dismissed.

Brown was convicted in 2010 in Oklahoma of lewd or indecent acts with a child.

In her plea hearing, Ramirez acknowledged she was aware Brown was a sex offender when she took the 13-year-old and three other underage girls who had been at a birthday party to Oklahoma to pick up Brown and bring him back to Missouri.

The rapes of the 13-year-old took place the following day, March 2, in a room at the Budget Inn in Carthage.

Brown had sexual intercourse with the girl and forced her to perform a sexual act on him, according to the probable cause statement.

Sarcoxie woman did meth, handed a sex offender a condom, watched him rape 13-year-old - and she got a plea bargain
Posted by Randy at 3:53 PM

I wonder what the original charges in 2010 were? Was that another plea deal? Did he even do any time for it?

I wonder how that child is doing now, 9 years later?

I wonder how many other children have been victimized by this guy that we don’t know about? Especially between the first conviction and the current one.

I wonder if this is the lightest or harshest sentence the law allows?

Randy can you find any trace of this perp's previous arrest and conviction online?

Randy, can you tell us where the parents were?

He got 5 years day for day for the first time. The young lady is doing good. She has set her life up right graduating from college and advancing her self. I’m proud of the Woman she is becoming.

I knew once he got out he would be trouble. I have to live with the dumb decisions he made back then. Thankfully I’m not a part of his life anymore! I’m great full the judge gave him lengthy sentence in this new case. And I’m glad he cannot hurt anymore little girls!

And his mom thinks he’s the greatest thing since sliced bread.