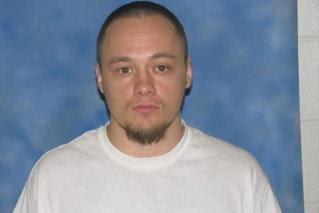 A Joplin man is free on $3,000 bond on charges of resisting arrest, driving while revoked and assaulting a police animal following a June 22 pursuit that began at 2307 W. 7th Street in Joplin.

According to the probable cause statement, Joplin Police attempted to make a traffic stop on Jared Prier, 33, who had allegedly left the scene of an accident.

Prier kept going until he drove off the road on Flower Lane, jumped out of his pickup and ran into the woods.

After a short foot pursuit, Prier was apprehended with the use of a police K9. While attempting to get Prier in custody, Prier repeatedly punched K9 Pax.


The brush with the law is not the first for Prier, who was sentenced to seven years in prison by Newton County Circuit Court Judge Tim Perigo in February 2015 for assault and abandonment of a corpse, in connection with an incident in which Prier shot one man twice in the stomach, shot at a woman and abandoned the body of a third person.

During the investigation of that case, Newton County law enforcement noted that Prier was a member of the Joplin Honkies gang.

Jennifer Miller stated to this detective that she, Thomas Webb, Jared Prier, and two other subjects (Jennifer did not want to identify) were partying at Steven Severs' house at 3689 Cherry Road the night of August 17, 2014.


Jennifer said that Jared nearly shot me in the head and actually nicked her right hand with a bullet causing it to bleed a lot. Jennifer stated that Thomas jumped up and ran around the table and that Jared approached him and shot Thomas twice in the stomach. Jennifer stated that she ran to the door and exited the residence and ran to the south side of the property to a trailer that Steven Severs' father, Lester Severs, resides inside.

When this detective located Jared Prier and asked what had occurred, Jared states that he was not present at the Cherry Road address that evening, that he believed Dennis "Nathan" Meyer had shot Thomas Webb.

Meyer was also a member of the Joplin Honkies.

The two first became suspects after they posted a photo on Facebook showing them with the corpse.

Prier's seven-year sentence came just 26 months after Judge Perigo sentenced him to seven years in prison after Prier pleaded guilty to felony assault, then suspended the sentence and placed him on probation for five years.

Perigo revoked Prier's probation in January 2015, but then sentenced him to seven years on the shooting and four years on the abandonment of a corpse charge.
Posted by Randy at 9:24 AM

Why is he even out running around. Sounds like he should have already been locked up for at least 10-15years for shooting people. What is wrong with our justice system?

Bond for a convicted felon. Wouldn't he be considered a flight risk since he was facing 15 years in prison. Were they waiting for an empty bed at the prison ?

He's actually a really nice guy who is one of the most loyal friends I've ever known. This "news" is so wrong about all of those situations it's unreal. You guys believe what you want but in his defense I'll say I think he's a good man who made some unclear decisions but deserves a chance for all of you to quit bringing up his past. P.s. Meyer was his best friend not just an associate.

It doesn't matter what you do these days. You can be a felon caught with guns and drugs, shoot people, steal cars and break into someone's house and steal their shit, assault people and just keep getting out of jail. This is a real problem that needs taken care of properly. But nobody gives a damn and keeps letting these criminals out to go commit another crime and then no one is safe.