Sarcoxie woman did meth, handed a sex offender a condom, watched him rape 13-year-old- and she got a plea bargain 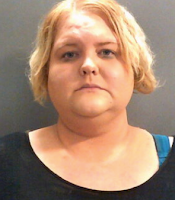 The events that led to Amber Ramirez' March 15 arrest and to her subsequent guilty plea in Jasper County Circuit Court Monday began when she left a birthday party at her Sarcoxie home with four underage girls in tow and drove to Oklahoma to pick up her sex offender boyfriend.

The probable cause statement for Ramirez, 37, says she brought the sex offender, identified after his arrest as Alvin Eugene Brown, 36, Big Cabin, Oklahoma, back to Sarcoxie.

After they returned to her Center Street home, Ramirez, Brown and one of the juveniles, a 13-year-old, were in the garage when Brown began smoking meth in a glass pipe and was joined by Ramirez, according to the girl.

Brown and Ramirez had sexual intercourse in front of the girl.

The next morning, Brown, Ramirez and the 13-year-old rented a room at the Budget Inn in Carthage, where Brown and Ramirez once again had sex in front of the girl.


At that point, the situation grew even worse. Brown joined the girl on the bed and began touching her arm and leg and took off all of his clothes. He then extended the touching to the girl's breasta and eventually penetrated her.

The girl yelled at Brown to stop and said he was hurting her.

Meanwhile, Ramirez sat on the other bed and watched the rape, but not before giving Brown a condom. In addition to sexual intercourse, Brown forced the girl to perform a sexual act on him.

.During her interview with investigating officers, Ramirez admitted to having sex with Brown in front of the 13-year-old and acknowledge Brown's assault on the girl.

The Jasper County Prosecuting Attorney charged Ramirez with two felonies- statutory rape and endangering the welfare of a child.


Monday morning, as part of a plea agreement, Ramirez pleaded guilty to endangering the welfare of a child.

She acknowleged knowing Brown was a sex offender (he is on the Oklahoma sex offender registry for a 2010 conviction for lewd or indecent acts to a child) and giving him access to the underage girl.

As part of the deal with the Jasper County Prosecuting Attorney's office, the rape charge was dropped.

Two days have been set aside for the trial.
Posted by Randy at 3:12 PM

Lock up those who let this evil sister skate,disgusting....typical Sw Mo "justice"....apathy prevails and gives junk like this mess

What! She is just as guilty if not more guilty, than he is. She is the one who transported minor's across state lines and put them in a situation where they would be abused.

What a skank-pig! Lock her Up!
Throw away the key.

What is wrong with the local authorities? NO PLEA Deal.
20 years sounds like a good start.

Disgusting. What is wrong with them? Giving her a plea bargain.

Transporting minors across state lines...for drugs and a rape?

SEEMS LIKE THERE ARE SOME FEDERAL CHARGES FOR THIS!


These people need to be doing a lot of hard time.

Instead there is a plea deal for this self admitted piece of shit?!

Why is there so much graphic detail in this article. I had to stop reading because it made me ill.

Why is he charged with statutory rape? Why not rape? Does SHE have to register as a sex offender?

Can somebody please explain why criminals consistently get plea deals? Is it to save the cost of a trial? Is the prosecutor lazy? I’m not being sarcastic. I’d like to know. This particular plea is so outrageous!

We’ve got to start holding our elected officials accountable for this kind of thing.

THIS IS HORRIBLE! SHE BROUGHT A REGISTERED SEX OFFENDER TO A BIRTHDAY PARTY FILLED WITH LITTLE GIRLS!! SHE ADMITTED TO IT! SHE NEEDS TO GO TO GO TO PRISON AS WELL!! THIS IS NOT JUSTICE AT ALL!! CRIMINALS GET PLEA DEALS AND THE VICTIMS GET TO LIVE IN FEAR FOR THE REST OF THEIR LIFE! VICTIMS ARE THE ONE WHO SUFFER! THIS IS WHY CRIMINALS KEEP GETTING TO DO WHATEVER THEY WANT...THERE IS NO CONSEQUENCES FOR THEM! SAD, SAD, SAD.

It can be bad for their re-election prospects!

LOCK THEM BOTH UP FOREVER! That poor girl will be forever damaged mentally, emotionally, and she will forever see herself as physically damaged. They ruined her life. They are both guilty of rape. People are so sick. The system is just as sick for letting people like this get away with horrible things.

YES - THIS WOMAN SHOULD HAVE BEEN GIVEN A SIMILAR SENTENCE AND PUNISHMENT FOR HER CRIMES AGAINST THIS YOUNG CHILD AND THE OTHER CHILDREN... NO MERCY!!!

This is SW-Missouri - the Defense Attorneys, Prosecuting Attorneys, and Judges are all in the Good-Ol-Boy Network - - They Donate to Each Other's Campaigns - for Favors and Special Deals - - so they can Sell their Legal Profession to the Highest Bidders. Where else would a Former Drunk Judge Richard Copeland - Who Killed two innocent people and got away with it. The same Judge who then allowed his Defense Attorney to bring every DUI / DWI Case in front of him so he could them all Leniency

Who was his Defense Attorney - Who was the Judge who let him go right back to being a Judge with NO CONSEQUENCES!!!

WAKE UP - MINIONS OF SW-MISSOURI - - STOP VOTING IN THESE PEOPLE BOTH JUDGES, DISTRICT ATTORNEYS, AND LOCAL POLITICIANS - - THEY ARE CORRUPT AND HAVE TURNED THIS AREA INTO A LAUGHING STOCK - -

DEMAND CHANGE FROM THE PROSECUTOR AND JUDGES

7:33
We need more graphic detail. Maybe that would motivate public outcry for change. These are elected officials figuratively raping and sodomizing these child victims with their plea deals. By doing nothing, society is passively supporting it. We “watch” this go on and do nothing. So are we that much better than this woman who watched?

It's wrong if it was there daughter or granddaughter somebody needs to protest this! Get more attention to it

My ex had sex with an underage girl. She was to scared and scarred to face trial, so they plea bargained to child endangerment. Made me sick...thats our system, it sucks

Drain the swamp!! Good ol SW MO is corrupt!! This is sick! I pray for this girl and her family!! We need honest judges and lawyers in this town and the rest need gone!! Karma will come to those that do dirty deals. Our system is pathetic. No justice in SWMO!!

Pissed off in Jasper County said...

This is an outrage, how can someone like this get a plea deal and why is he not charged with rape of a minor, I can't believe this.. Smh.

Not saying that I agree with the law, but it could be that the 13 year old consented. Although the story does say she yelled at Brown to stop.

There just might be a good ol boys club in Jasper County. I don’t know, they might all be crooked as hell. BUT WHO KEEPS VOTING THEM IN OFFICE? This problem lies directly at the feet of Jasper County voters.

A 13 year old cannot legally give consent to sex. Period. It doesn’t matter if she literally begged for it to happen. It’s still statuary rape.

The prosecutor makes a deal with the defense attorney, usually a court appointed attorney. Guess who foots the bill for the court appointed attorney. Yep, taxpayers. I’m not sure, but I think they get paid $200-300 an hour. Then the judge approves it. I suspect when the prosecutor files the original charges he knows he’s going to agree to a plea. Heck, he has to know he will because even WE KNOW HE WILL.

First of all, the Jasper County Prosecuting Attorney is a woman, Theresa Kenney, which almost seems worse to me. Second, thank you Randy Turner for using the appropriate term in your headline - RAPE. Not sex with a minor. Sex with a 13 year old is RAPE.

Read the state laws linked to above. I think what the poster was getting at was not consent in the legal sense but she was was not forcibly raped. I think the intent of the post was pretty clear.

Once she yelled stop it was considered rape. My uncle is a retired cop. His dad is a retired police chief. They have ran across this problem multiple times. But like was said before. The system is screwed up. In my mind rape is just as bad as rape.

If I were the parents I would go around Jasper County. Go to the state the supreme court. Crossing
state lines with children and drugs.....sounds like children sex trafficking. This is horrible. Blow this wide open!!! That woman is a threat to society!

I adore all the legal minded people who post here. Absolutely the best place to come for a better understanding of our legal system.

Some of the recent posts are taking away from the issue of how awful the crime was and how the plea deal was as bad as the crime.

Which ones? The ones talking about the state laws and asking if the courts decision is the problem or if the laws are the problem?

Looks like the guy got a plea deal too.

12:00 doesn't sound sarcastic to me, sounds like a legit question.

Here is a question, where were the parents?

I wandered the same thing.

Call these people and tell them Save our kids! said...

Call the prosecuting Attorney's Office and email both Prosecuting Attorney and Judge.
Keep it clean and professional.
They won't read it here.
Tell them your not voting for them if they aren't going to protect these children!

Call these people and tell them Save our kids! said...

I have a question. Given the life style of Brown and Amber...have they been tested for STDs? If they passed along something to the girl wouldn't that be considered murder if it is something like AIDS?