After two AR-15s removed from home, Andreychenko freed on $10,000 bond, Wampler representing him 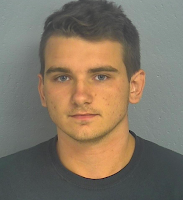 After two AR-15s and ammunition were removed from Dimitrey Andreychenko's home, the 20-year-old who walked into the Wal-Mart Neighborhood Store on Republic Road in Springfield Friday was freed from the Greene County Jail. .

During an arraignment today, Andreychenko entered a not guilty plea and his preliminary hearing was scheduled for 10 a.m. September 16 in Greene County Circuit Court.


Andreychenko, who is charged with felony making a terroristic threat, is being represented by powerhouse Springfield criminal defense attorneys Dee Wampler and Joseph Passanise.

Andreychenko told Springfield police officers he had taken the weapons into the store to see if "Wal-Mart honored the Second Amendment."
Posted by Randy at 1:58 PM