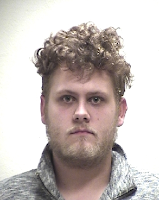 (From the Clay County Sheriff's Office)

Brown was arrested last week after law enforcement officials were made aware of the threat involving a mass shooting posted on social media.


He is being held in the Clay County Detention Center with a $100,000.00 bond.
This case is not related to the recent Wal-Mart or Reddit investigations by other agencies.

(The accompanying video is from KMBC in Kansas City.)

And somehow without confiscating others' guns, he was stopped. How in the world did that happen?