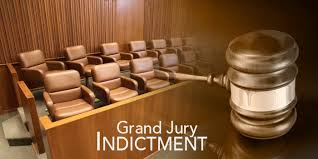 A federal grand jury indictment charging a Joplin man with methamphetamine trafficking, conspiracy and selling meth in a home where someone under 18 was residing was unsealed today in U. S. District Court for the Western District of Missouri.

The four-count indictment alleges Mark Burdge, 49, possessed methamphetamine with intent to sell on May 9, 2018 and July 18, 2019, was involved in a meth trafficking conspiracy between those two dates and on July 18, had the meth on premises where a child was living.


Burdge's arraignment and detention hearing are scheduled for 10:45 a.m. Friday in Springfield.

(Note: This post has been edited to correct Burdge's age at 49, rather than 39 as originally reported.)

Why can’t there be swifter justice? None of us are safe anymore. It’s easier just to keep our heads in the sand rather than demand some type of criminal reform I guess.

But... but... but Mark is such a decent guy. He comes from a good family. He eats all his vegetables. He held old wom... nongender specific people across the street. It is just bad circumstances that he started trafficking meth and contributing to the destruction of other people's lives. Knowingly spreading his disease to others in order to make profit without a care in the world for the lives he destroyed isn't his fault. You see, he is an addict. A decent guy who, I have read, would give you the shirt off his back. Yep, that's Mark, a good ol' decent meth addict and trafficker who runs lives and communities. Decent guy mainly.

We’re inoccent until proven guilty in this country aren’t we. As far as bieng and scared and wanting criminal reform how far would you go to get it. Already this article paints a picture of Mark that’s not.because of the “minor child” Anyone ask where its mother is or was. Any body ask how or why a mother would subject her child to that atmosphere: The child doesn’t live there he has a residence in Joplin with the grandpa for a few years at least.Its a nice home that his wratchet mother refuses to accept that she has help and still won’t raise her child. Mark isn’t perfect we all fall short. He is a believer and the consequences to his actions were will work out for his glory.Who knows maybe now it’s quite enough to study the word. I’m praying Mark for you , hopefully the task force is still watching because thief’s buy the dozens will be out there looting.as before. I’m going to say one more thing. Please if you have a family member who suffers from crippling addictions or mental illness find them show them that thier loved by you and ask if thier ready to get help, with your support might be astonished by the answer.
B