Today is 75th anniversary of famous Truman speech in Lamar, plus most visited Turner Report/Inside Joplin posts this week 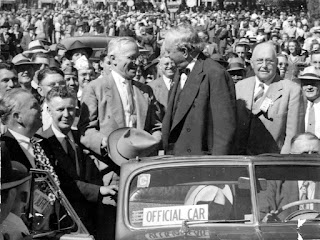 Having always been a fan of Harry S Truman, I was shocked earlier tonight when I read a USA Today headline that included Truman among the 10 poorest presidents in U. S history.

That was contrary to everything else that I read describing his rise from low approval ratings when he left office to sometimes cracking the top five U. S. presidents.

When I read the article I realized Truman's reputation was intact. The "poorest" was referring to the presidents who had the least money.

As I noted earlier this week, I have been researching President Truman for the past several months for my next book The Buck Starts Here: Harry S Truman and the City of Lamar.

During my research, I have been poring over microfilmed and online newspapers from 1884 to the 100th anniversary celebration of Truman's birth in 1984. I have had help from people at the Barton County Historical Society, the Truman Birthplace, the City of Lamar, the Carthage Public Library, the Jasper County Records Center, the Joplin Public Library, the Truman Library and Museum in Independence, and people who have helped me considerably by providing material for my research, including historian Marvin VanGilder's son Chris and Arthur Aull biographer Chad Stebbins.

As much as I have enjoyed working with all of the documents, the most rewarding part of working on this book has been the privilege of interviewing people who were in Lamar when Truman returned 75 years ago today and for the 1959 dedication of his birthplace.

Sadly, many of those who would have had wonderful stories to share are no longer with us, but I have been fortunate enough to talk to several who have told me not only of Truman, but of World War II, both overseas and on the homefront, some of the great unsung heroes of Lamar history, some who have worked for the Aull family when it ran the Lamar Democrat and some who recalled major events that shaped the city's history.

Though I have always had an appreciation of Harry S Truman, it was not until I began researching this book that I realized just how important the speech was that Truman gave 75 years ago tonight at the Barton County Courthouse in Lamar.

Not only was the newly named vice presidential candidate returning to the city where he was born, but it was the first political speech of the 1944 campaign since FDR was in poor health and said he would do no campaigning because of the need to concentrate all of his efforts on winning the war.


It was also an opportunity to take the measure of a man who seemed likely to become president well before Roosevelt's fourth term ended.

This week, I wrote a column for the Lamar Democrat about Truman's speech and the many things that were going on in the City of Lamar when the senator arrived that day, including the murder of the Barton County sheriff and his son with the three killers still at large, the news that a Lamar soldier had been killed in Germany, the first Lamar soldier to die during the war, and the news that the son of the owner of the Travelers Hotel was missing in action.

I reprinted that column on the Turner Report and it was among the most visited posts for the week.

A big thank you

Thanks to all of you who have subscribed or made a financial contribution to the Turner Report/Inside Joplin during August. As always, your support is deeply appreciated.

For those who have not recently contributed and wish to do so, PayPal buttons can be found below or you can mail your contributions to Randy Turner, 2306 E. 8th, Apt. A, Joplin, MO 64801.

The list of the most-visited posts this week on the Turner Report, Inside Joplin and Inside Joplin Obituaries and links to each of those posts can be found below the PayPal buttons.

4. Joplin man who broke six-week-old baby's leg may spent only 120 days behind bars

10. Seventy-five years ago this week, Harry Truman returns to the city where he was born

2. Highway Patrol report: Carl Junction teen was standing in drainage ditch when he was swept away by flash flood waters

3. Webb City teen injured in collision with Freightliner on I-49

4. West Zora to be closed from Lone Elm Road to Schifferdecker